5 monasteries in Bhutan that must be visited 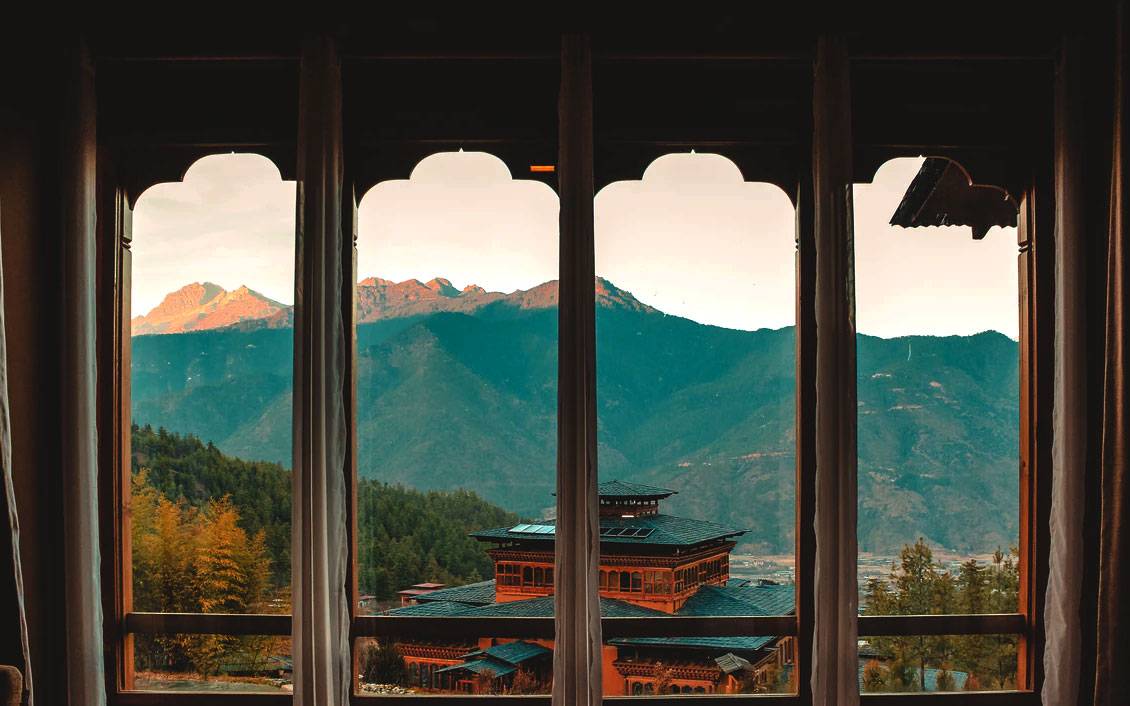 A dormant part of you awakens when you are in Bhutan. This is what travelers often claim to be an epiphany. A stream of consciousness that tells you that this is where you have always wanted to be. There is a need to explore more, sometimes it may be culture, history, sights and sounds but we are often in search of a spiritual experience too. Something that connects us to an otherworldly familiarity. Some use the word spirituality to mean religious ecstasy, but for many it is a reminder of why we travel, why we are drawn into increasingly remote pockets of the earth. And why we visit monasteries and temples and observe rituals, festivals, traditions that we didn’t care about much long ago. Perhaps because being surrounded by reverberating, soul touching Buddhist chants, located amidst dramatic landscapes, admiring ornate, decorated architectural marvels encapsulates the overwhelming experience of a visit to a monastery.  Or being at a monastery, observing a different ways of life is a reminder of the privilege that travel can afford. A reminder that travel will continue to surprise us, even when we’re standing in a different place, amidst different cultures and belief systems. This is why we have made a list of the 5 amazing monasteries in Bhutan that must be visited. We have not mentioned Taktsang “The Tiger’s Nest” Monastery here because, you will visit it anyway, and, why wouldn’t you? But there are others that you might miss. Others, that are equally amazing, glorious and grand. 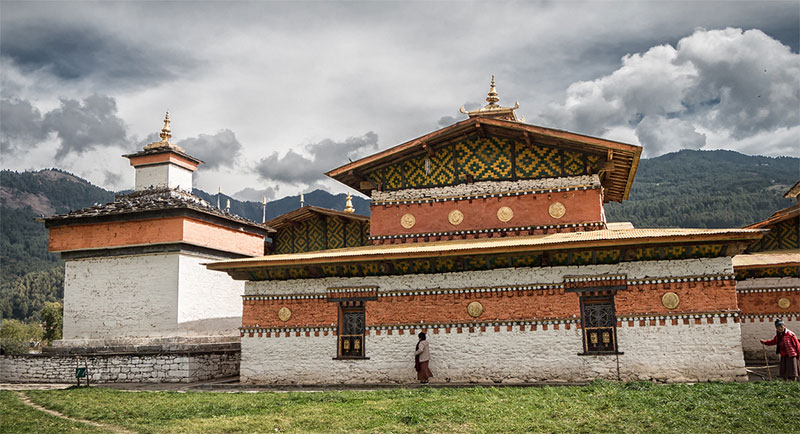 The stark beautiful landscape of Bhutan itself is a source of great spiritual enhancement. Yet, the Bhutanese have proven that when you add holy shrines to an already magnificent region, blessings abound, and life is further enriched. A perfect instance is Jambay Lhakhang, a 7th century monastery located in Jakar, Bumthang, for it particularly dominates the region, revealing its spiritual energies, guiding the local populace and enhancing the beauty of the already magnetic natural surroundings with ornate Bhutanese art and architecture. At the turn of the 7th century, a Tibetan King named Songtsen Gampo built 108 temples around the Himalayan region to subdue an ogress. Jambay Lhakhang is one of those temples. This is a single storied complex built on a plain above the Chamkhar River and is situated at a distance of four kilometers north of the district headquarters. The main sanctum sanctorum is a small middle shrine with a circumambulatory.  This contains a large idol of Maitreya Buddha, adorned on either side by the idols of four Bodhisattvas. On one side of the doorway leading to the shrine is a painting of the historical Buddha while a painting of the Eight Manifestations of Guru Rimpoche is on the other side. The circumambulatory walls are covered with paintings of the Thousand Buddhas and decorated with a long row of prayer wheels. Four Chortens (Stupas), each of a different color, were built at the turn of the 20th century forming an inner courtyard. To the right, is Duki Khorlo, another sanctuary. The building to the north is in an extension of the same Duki Khorlo. The Guru Lhakhang forms the left side of the courtyard. It was founded by the Jakar Dzongpon in the19th century. The Sangye Lhakhang is above the main entrance of the complex. The annual five day festival of Jambay Lhakhang Drup is held there. During this festival, the dances include the “Terchham” which is Naked Dance, an ageless tradition still performed by the locals.

Arriving around Chimi Lhakhang feels like landing in the middle of an outlandish setting. There are phalluses everywhere, on the walls, rooftops and even in the form of memorabilia that you can buy on the streets! The famous fertility temple of Chimi Lhakhang must be on the visit list of every traveler who visits Bhutan. The temple stands atop a levelled hillock near Sopsokha village in Punakha. You roll into the village, some 20 minutes away from Punakha, along roads that run past meticulously tended paddy fields and mustard farms. Chimi Lhakhang was built by Ngawang Chogyal in the 14th century but more than its founder, the temple is known for Drukpa Kunley, the divine madman, who added a stupa and a meditation hall to the structure. Apparently, Drukpa Kunley was unconventional and quirky with an outrageous personal demeanor. He would fornicate, drink wine and would expose fake monks and scholars by flashing out his penis to ridicule them. Legend had it that Drukpa Kunley came to Punakha with the purpose of driving away an evil spirit from Dochula. He also created a ‘Flaming Thunderbolt of Wisdom’ and struck down that evil spirit that was in the form of a dog.

The structure of Chimi Lhakhang is an unadulterated example of Bhutanese medieval architecture. This is all thanks to the careful preservation by the locals and the government – where stylishly designed golden roof are complimented with white walls which are adorned with gold medallions that radiate beautifully amidst the green surroundings. This has certainly seemed to encourage the extremely ornate designs on the window frames and the door which lends the temple a rich, vibrant aura. There are prayer wheels on all sides of the structure. The inner sanctum has the idol of Saint Padmasambhava and also the statue of the Divine Madman himself. 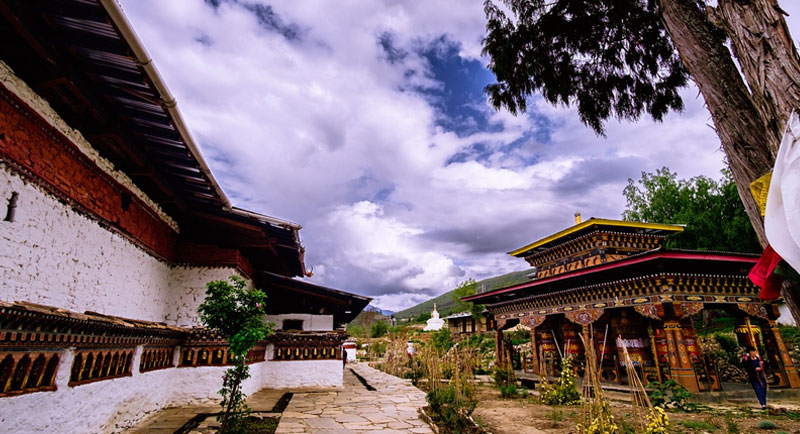 As beautiful as they come, the exquisite Kyichu Lhakhang houses the massive idol of Guru Padmasambhava with some of the finest Bhutanese decorative work that adorns this structure. Sumptuous embellished patterns, colorful murals of deities and patron saints, and the inner sanctum which houses the amazing 7th century idol of Jowo Sakyamuni, are what makes Kyichu Lhakhang one of the most beautiful temples in Bhutan. This also makes it one of the holiest shrines in all of Bhutan. The statue dates back to the 7th century and is built in the image of Gautama Buddha in a meditative pose which was originally painted in the time of Gautama himself. There is a statue of Chenrezig nearby, an all-knowing deity said to embody the compassion of all the Buddhas, bears 11 heads and 1,000 arms. Kyichu Lhakhang is in Paro, and was built by King Songsten Gampo of Tibet, in around 650 A.D. From its humble beginnings, the temple has been renovated, upgraded and structures added which gives it a splendid form today.

The people of Bhutan also believe that Guru Padmasambhava himself made a pilgrimage to Kyichu Lhakhang in the eighth century, and that he hid treasure teachings around the temple, thereby giving the temple utmost religious significance among the Buddhists. After massive renovations in the 1800s, Kyichu Lhakhang underwent some changes in 1968 when the queen mother Ashi Kesang Choden Wangchuck expanded the Kyichu Lhakhang so that it could touch the Guru Lhakhang, an adjacent chapel that houses statues of Padmasambhava, which is 5 meters tall, and Kurukulla, or Red Tara, a female lotus deity, clutching a bow and an arrow made of flowers. Ashi Kesang Choden Wangchuck has also written a brilliant book called “Kyichu Lhakhang: The Sacred Jewel of Bhutan” which you can read to enhance your information on why the temple is one of the most visited in Bhutan. 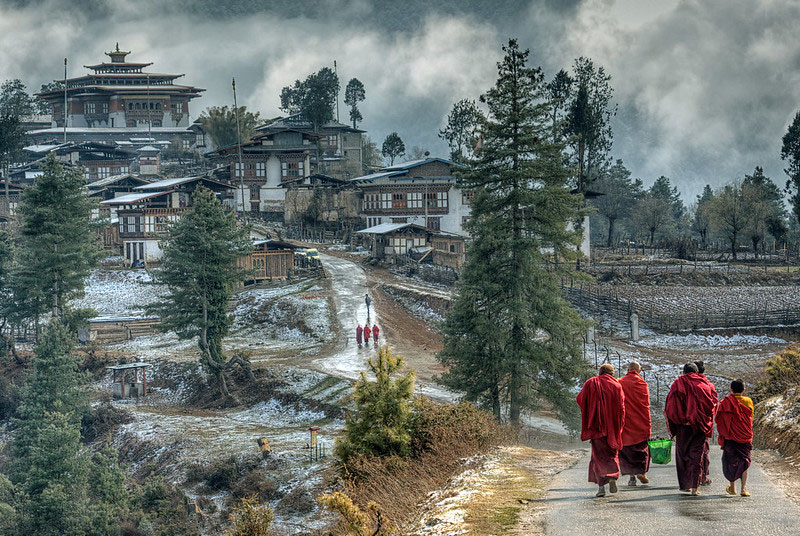 Gangteng is beautiful not just for its elaborate, decorative structure, but also for its ambience and religious importance. It is located perfectly amidst the green Phobjikha and while it may not mean so much for non-Buddhists, for the Bhutanese people, it holds a very high religious and spiritual significance. That is why the monastery underwent massive restoration in the year 2000. Gangteng “hill top” monastery holds a very important position in Bhutanese religious traditions. Its physical location too is atop a forested hill (as the name suggests) that oversees the beautiful Phojikha valley. It is the seat of the Pema Lingpa tradition which caters to the Nyingmapa school of Buddhism. Located in the Gangtey Village, it is situated in the Phobjikha valley which is famed across the world for the black necked cranes that visit Bhutan every year. In the 15th century, a Buddhist Saint named Pema Lingpa had made a prophecy which led to the construction of this monastery in the 17th century.  It was originally built by the locals but a special architect from Tibet was commissioned for the project.  There is a large central tower which has a main prayer hall, also known as Tsokhang, that has been built with eighteen sturdy and hefty wooden pillars, believed to be the largest in Bhutan. The central tower itself is surrounded by 5 temples. The inner sanctum houses the funeral chorten of founder Tenzing Legpey Dhendup. Upstairs is the Machey Lhakhang, holding the central funeral chorten of the sixth Gangtey Trulku, Tenpai Nyima. Elaborate wood work, paintings and frescoes adorn the temple of Gangteng. These are what immediately catches your eye when you visit Gangteng Monastery. The 11-faced Avalokitesvara Lhakhang is at the entrance to the main temple. To the east and the west of the monastery, there are living quarters for the monks. 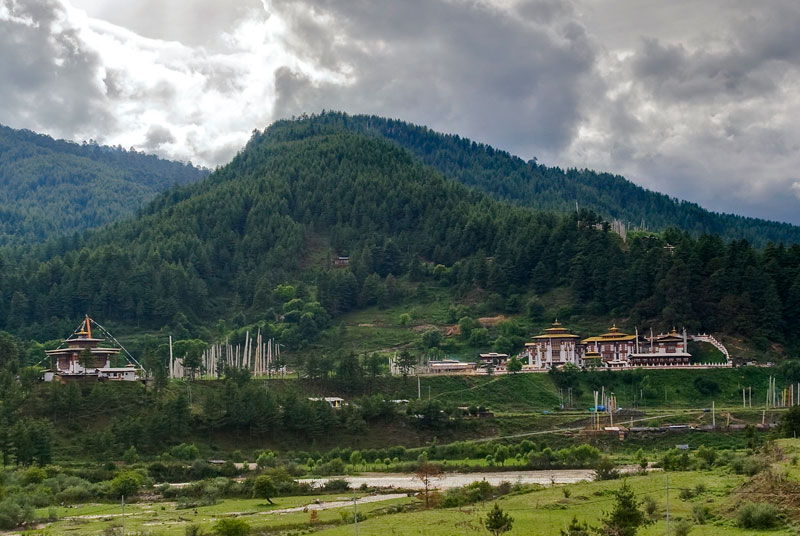 It is the sudden contrast of lights we notice, as we come closer to Kurjey Lhakhang — the green of trees behind it, the sun-warmed greenish pasture along the complex, and the white-washed walls adorned by various shades of red and brown window frames of the temple. Kurje Lhakhang is one of the most sacred monasteries in all of Bhutan. Legend has it that Padmasambhava (Guru Rimpoche) meditated here and left the imprint of his body upon a rock. “Ku” meaning body and “Je” meaning imprint, in Dzongkha, a place that marks the victory of Dharma over evil, and what has defined Bhutan over many centuries.  Located in Bumthang valley, the Kurje complex comprises of three buildings. The first building on the right is the oldest and was founded by King Sendha of Bumthang after his conversion to Buddhism. This structure was rebuilt in 1652 AD. Sampa Lhundrup, the second temple was constructed in 1900AD by the first King Ugyen Wangchuck. The temple houses a giant idol of Guru Rimpoche, after the counsel of Bakha Tulku, a monk of the Nyingmapa sect. In 1990, another building was added and was called the Ka Gon Phur Sum Lhakhang. This was done to honour the fourth King’s wishes to house the sacred idol of Palchen Heruka. Amazingly this temple is also the resting place of the first three kings of Bhutan. A large tree stands behind the temple buildings. Believed to have been planted by Guru Rimpoche, this marks the time of subjugation of evil spirits and where the wheel of Dharma was turned for the very first time. Kurje Lhakhang is 5 kms north of the district headquarters and is located on the right bank of the Chamkhar River. Its enclosure is made up of 108 Chortens