There was a problem rendering your image gallery. Please make sure that the folder you are using in the Simple Image Gallery Pro plugin tags exists and contains valid image files. The plugin could not locate the folder: media/k2/galleries/329 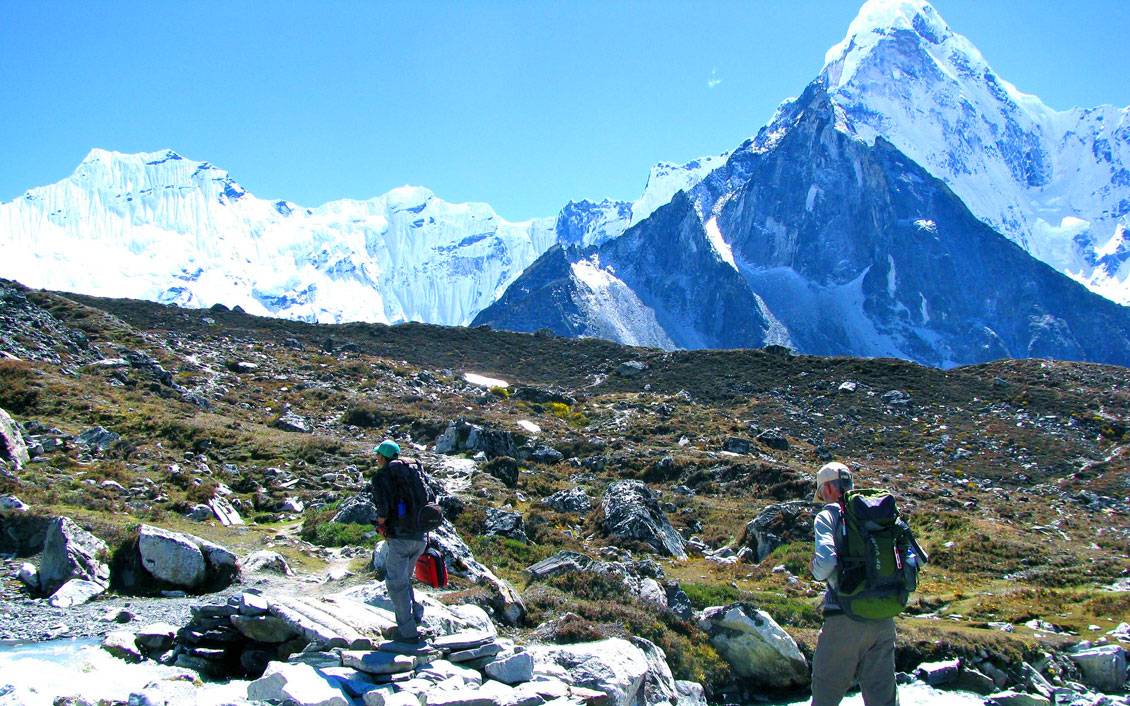 Short treks, when planned the right way, can be quite rewarding especially during the perfect trekking seasons.  During peak spring season, one can observe wild flowers, which carpet the meadows, where clear streams run down from forested slopes.

During the fall, the skies are clearer and one can walk on high hills against a backdrop of the stunning Himalayan peaks, most of which are tall 8000 metre peaks in the Himalayas.

There is an element of the mythical about the Himalayas. Its mention can invoke fascination and visiting it can be extremely overwhelming. The Himalayas can have this effect on people: its function in the imagination of the world is that of a place to be challenged, to be conquered and also feel the greatest sense of humility at the same moment. It exists to enable us to find some truth about our own unimportance by experiencing its vastness. And the best way to see it, experience it, is by trekking. Although any form of exploration of the Himalayas is magical, we thoroughly recommend excursions off the main path and hiking across the high hills of Nepal though trekking doesn’t come without its fair share of challenges. There are trails that take you from 12 to 25 days easily and some of these trails can be very challenging and physically and mentally exhausting. This can be quite daunting for those who are less adventurous. Fortunately, Nepal also offers a wide array of short treks that might take a considerably short period for completion. Short treks, when planned the right way, can be quite rewarding especially during the perfect trekking seasons. During peak spring season, one can observe wild flowers, which carpet the meadows, where clear streams run down from forested slopes. During the fall, the skies are clearer and one can walk on high hills against a backdrop of the stunning Himalayan peaks, most of which are tall 8000 metre peaks in the Himalayas. 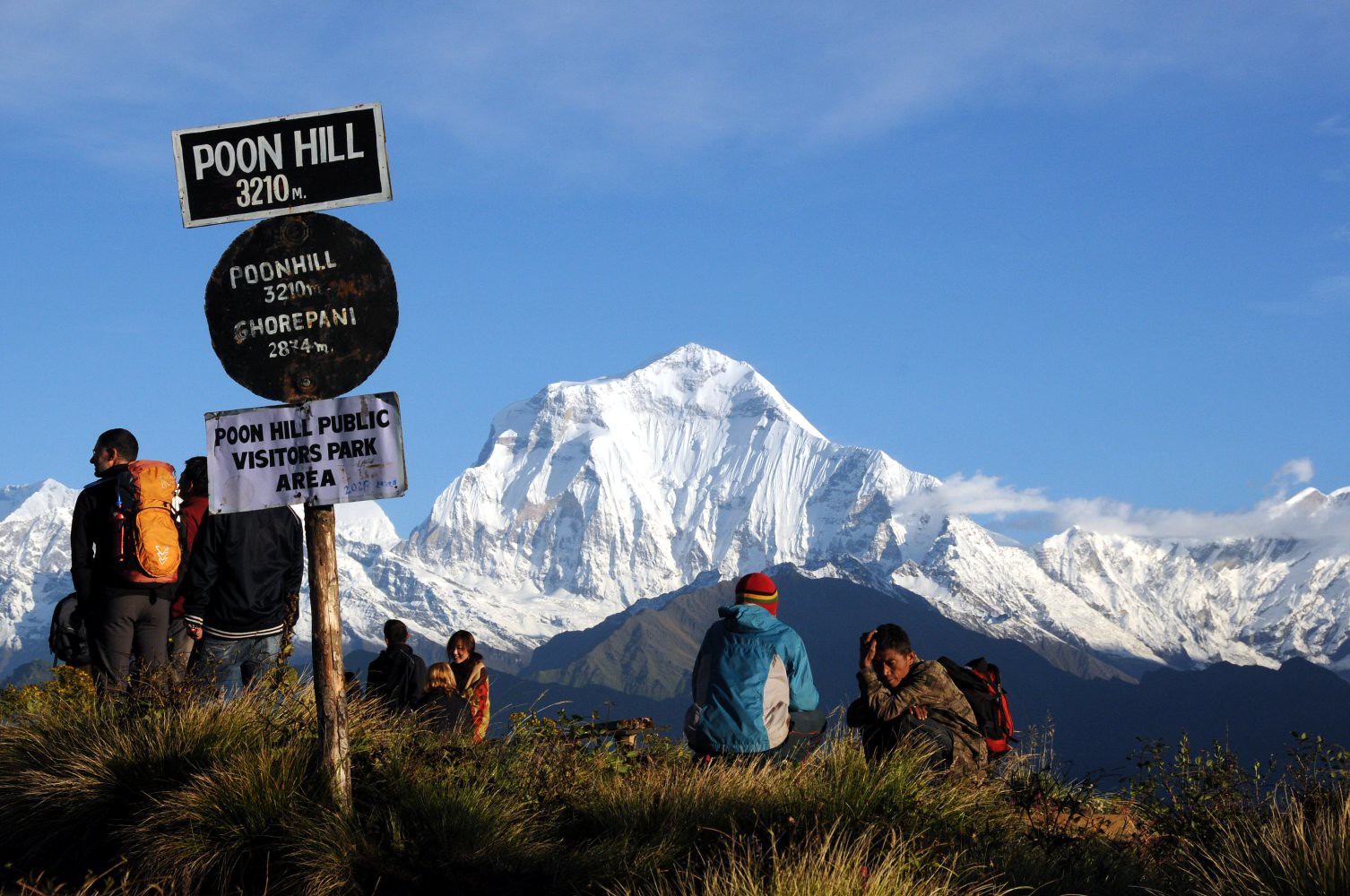 Arguably the most popular trek on a tourist roster, Ghorepani Poon Hill Trek involves not more than 4 to 5 days in Annapurna region and is famous for the jaw dropping mountain views all along the route. Situated in the mid-west region of Nepal one has to first reach the picturesque town of Pokhara in order to make this trek. You will have to drive up to Nayapul and then start trekking. You can walk accompanied by the most attractive villages, fields and forests, wandering through the beautiful backdrop of the Himalayan peaks with elevated hills that shine a beautiful green under a cloudless sky. The maximum height that you will reach on this short trek is 3,210 meters as you climb up to a viewing point called Poon Hill, famous for the glorious views of the sunrise. From this hill you can see the Annapurna South (7,219m), Machapuchhare (6,993 m), Himchuli, Annapurna III, Dhampus peak, Dhaulagiri II, among various other peaks of the Annapurna range. 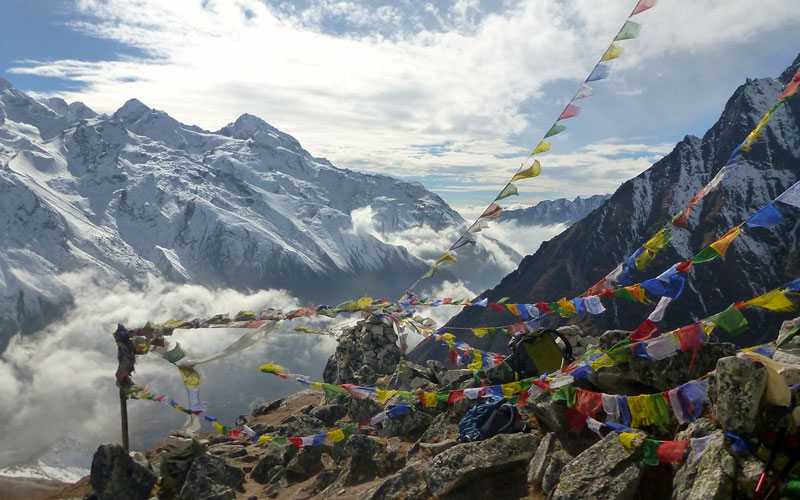 Early spring brings unblemished mountain views to the Langtang region. Enough to blow away the cobwebs as you trek from one idyllic, high hill to another along unbeaten tracks scented with juniper and rhododendrons. This trek will take you about 6-7 days, which, considering Nepal’s amazing trekking trails, is considerably short. Langtang region is in the northern central part of Nepal and is quite close from the capital city of Kathmandu. The Langtang mountain range has about 12 mountain peaks and chances are, you might get to see all of them during this trek. You must first make a 7 hour drive to Syabrubesi then trek up to Changtang, also known as Lama Hotel before heading up to Langtang. Surrounded by amazing vistas that unfold with each ascent, you have to trek up to Kyanjin Gompa. From there you can either climb up to the Kyanjin Ri view point or the Tsergo Ri viewpoint though both these viewpoints provide excellent views of the Langtang range. To return back, retrace your steps back to Kathmandu. 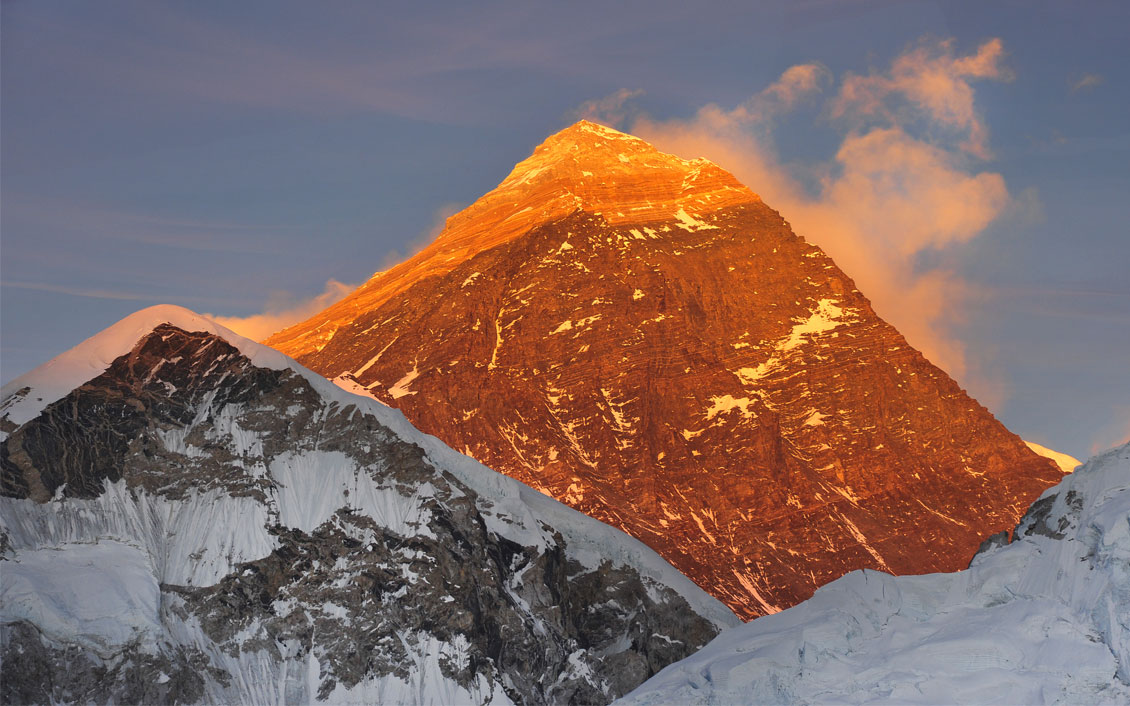 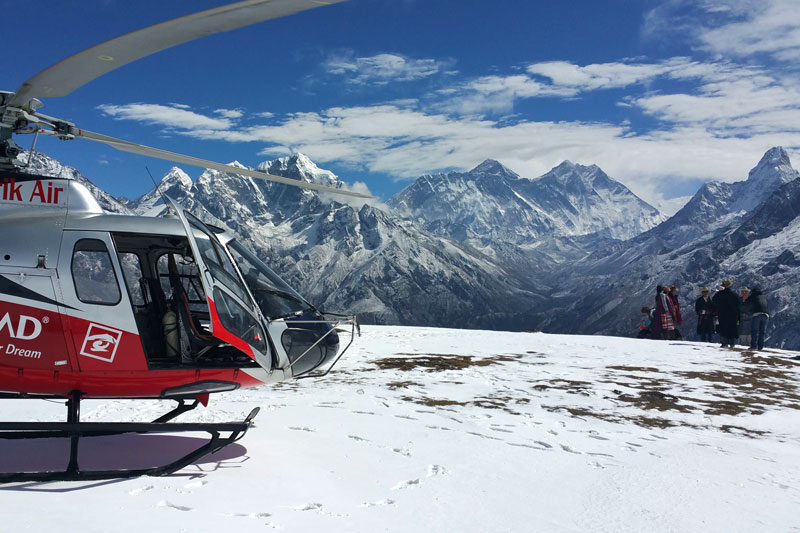 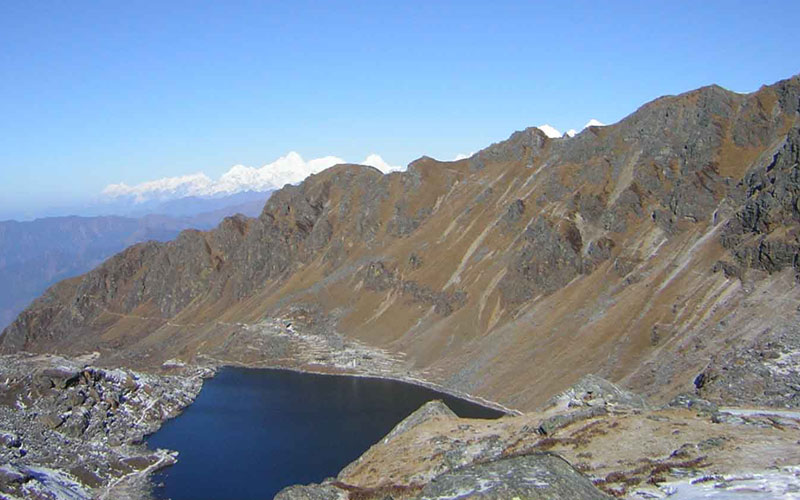 The dramatically beautiful Gosaikunda Lake lies in the largely tourist-free Langtang region. Birthplace of the mighty Trishuli river, it is a quiet locale that sees a few Hindu pilgrims and some trekkers during the summer season. This alpine freshwater lake is frozen for about six months in a year. For the Hindus, this lake is associated with Shiva and his wife Gauri and finds mention in Hindu scriptures. To make this trek you will have to drive to Dhunche which takes you about 6 hours from Kathmandu. From Dhunche you can hike along splendid waterfalls, high hills and lush forests to reach Chandanbari. The average hour for a day’s trek will not be more than 5 or 6 hours so you will get a lot of time to enjoy the amazing views of the Himalayas. This route includes some of the most beautiful views of Mount Ganesh Himal. You will also come across a few hillside monasteries. Once you reach Gosaikunda you can retrace your steps back to Kathmandu. 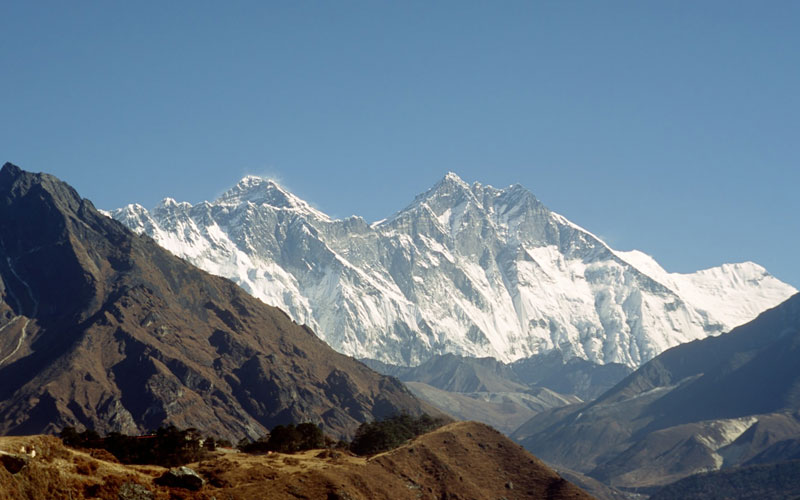 For the ultimate trekker, there is no other place like Everest. Many travel up to the base camp to feel closer to the top of the world. Many come to conquer the mountain. It is breathtakingly beautiful but also very demanding. But there’s also an option for a shorter trek, the one that provides uninterrupted views of Mount Everest among other peaks but also cuts down the trekking time to merely 4 or 5 days. You first have to take a flight to Lukla from Kathmandu and then trek up to Phakding. From Phakding you trek again for a few hours to reach Namche Bazar, the only town in the Everest region. Namche Bazar is the place where all trekkers acclimatize before heading off to the Everest Base Camp. During this trek you will have to do the same. While acclimatizing, you make a 2 hour hike up to the Everest View Hotel from where you will see uninterrupted views of Mount Everest along with Mount Lhotse and a whole lot of other massive peaks. 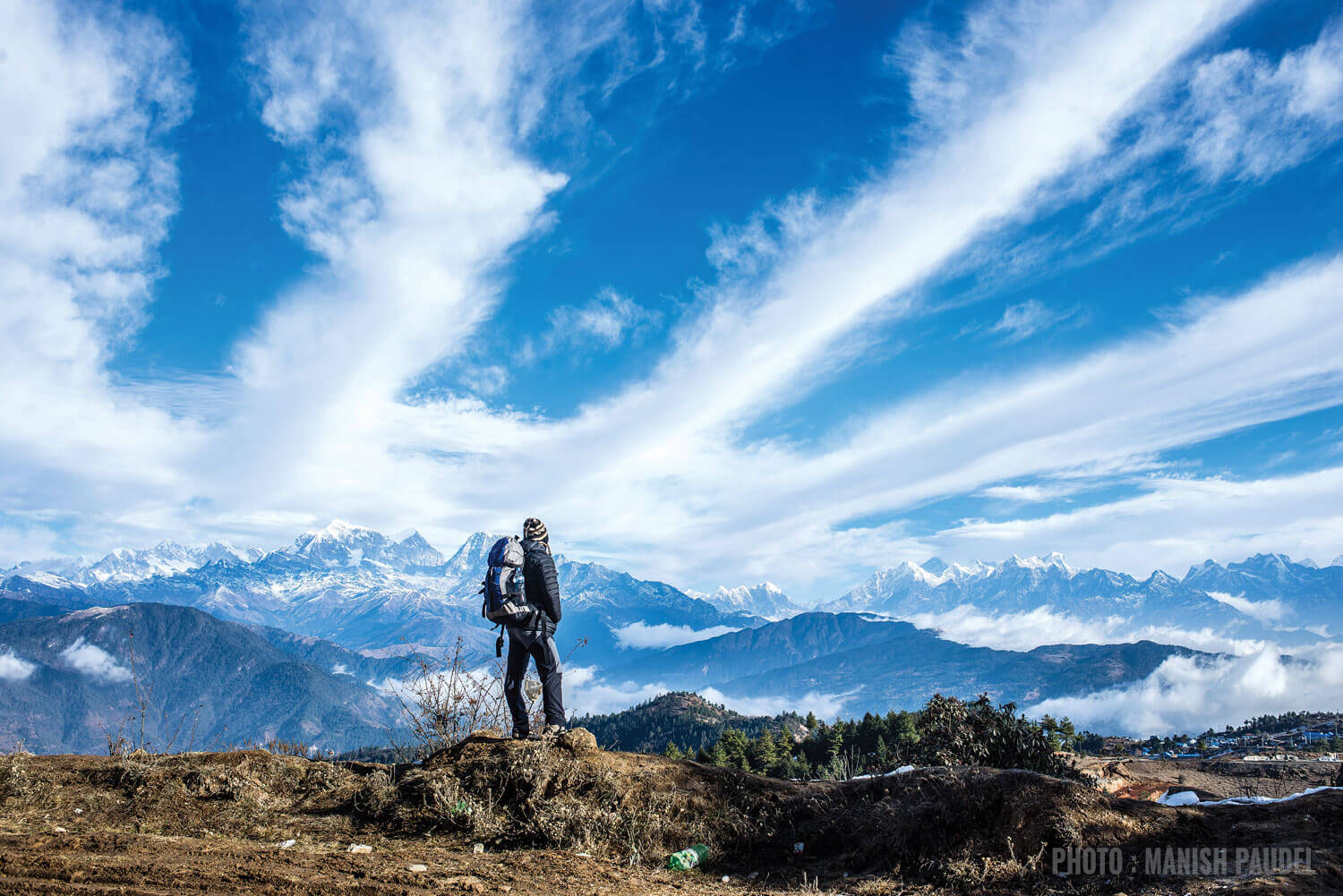 Snow-covered peaks in the distance, quiet villages upon ridges, ragged rocks peeking out beyond the hills and sacred, mystical monasteries out of nowhere, encapsulated the Pikey Peak trekking experience. From Kathmandu, a drive of 7 hours will take you to Dhap Bazar. From there you will have to trek to Japre and finally to Pikey base camp. You must climb to the top of Pikey Peak for amazing view of mountains that stretches from the western Annapurna to the Eastern Kanchenjunga. All from one location. You will also come across a few ancient monasteries like Thubtencholing monastery. This trail that is used by pilgrims and very few trekkers is the gateway to the spectacle, nature and the unruffled beauty of Nepal’s mountains. From Pikey Peak, you trek a few more days among the beautiful scenery before you reach Phaplu where you can visit the beautiful 100 year old Chiwong Gompa monastery and then head back to Kathmandu.

Read more:
10 Places of Interest in Nepal
5 Uncommon Treks in Nepal
5 Trips to add while you are in Kathmandu
5 Spiritually Powerful Places in Kathmandu - A must Visit.
6 Mountain Peaks in Nepal that you can conquer easily
5 Beautiful Lakes of Nepal
5 Books About Nepal You That You Must Read