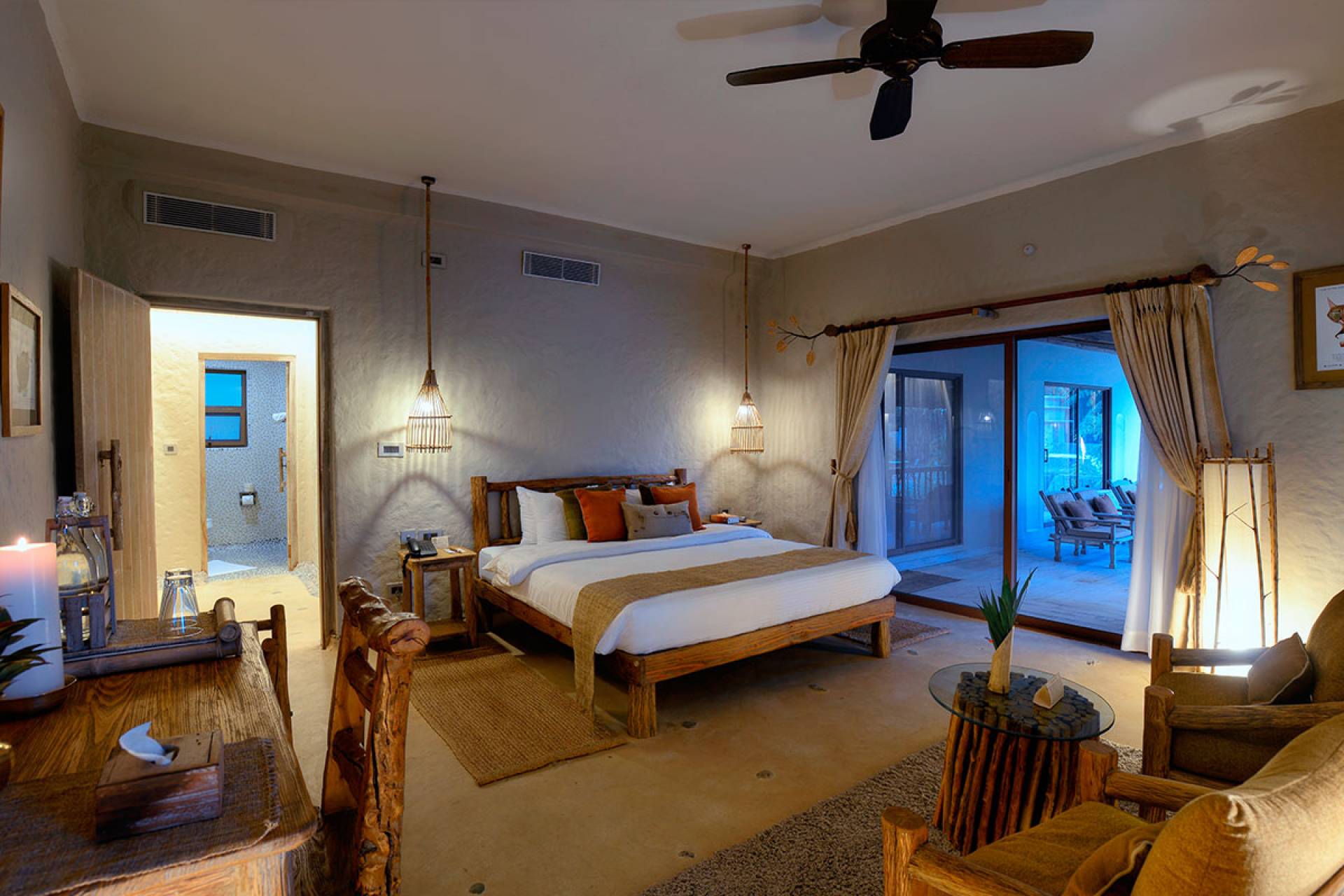 The river front location of Barahi Jungle Lodge amidst rustic surroundings is perfect for comfortable getaways and allows luxuriously appointed thatched roof cottages, breezy decks, an open-air swimming pool and uninterrupted jungle views. The lodge is located in Meghauli in West Chitwan which is generally considered the best area for viewing wildlife.

There are 18 single thatched cottages and 8 duplex cottages to total 34 air-conditioned luxurious rooms, all of which have their individual balconies that open to the views of the park. There are attached bathrooms with tubs and large furniture, designed to suit the surroundings. It has used a lot of local wood and bamboo as construction materials. The lodge, which sits at a property of about 12 hectares blends seamlessly with the neighbouring Tharu villages though ironically, it is also one of the most luxurious hotels in Chitwan. Prior to the arrival of Bahari Jungle Lodge, most hotels or resorts in Chitwan weren’t keen on amplifying luxury for its visitors to allow for “roughing it up” as one would in a forest but now that Bahari presents comfortable holiday experiences, that which is a requisite in a Jungle, many resorts are catching up to the idea.

The lodge also bears a neat appearance and has an Ayurvedic spa. The lodge has an in house experienced team of naturalists, 4 private elephants interestingly named Ranikali, Sundarkali, Madhumala and Rangmala, and a fleet of vehicles. Various assorted meals are served with organic vegetables that are grown locally, and is served in a large dining room, designed for a good view of the forest, from any table. There is also a bar, and a good one at that.

There are a lot of fun activities that you can do (other than a jungle safari) while you are staying at Barahi. You can go canoeing in the river or stroll around the villages nearby for a close encounter with the Tharu tribe.  Barahi Jungle Lodge’s efforts to curate customized luxurious wildlife experiences for guests, have been widely recognized. In 2016, South Asian Travel Awards declared Barahi Joggle Lodge as the "Best Jungle Lodge of South East Asia". In the same year, Barahi was also awarded with the title of Best Boutique Hotel of Nepal", "Best Jungle Lodge of Nepal" and the "Best Eco-Lodge of Nepal", by SATA. In 2017, for a second year in a row, SATA awarded Barahi with the title of the "Best Jungle Lodge in Nepal".

In 2016, Barahi Jungle Lodge was also selected by CNN as one of the "Best 5 responsible Boutique Hotels in Nepal". Operating in Chitwan National Park ensures integration with the local environment by committing to the highest standards of eco-sensitive practices. Barahi Jungle Lodge has been certified as a "Green Lodge" by UK based TOFT.