Beneath the Surface: 5 places to visit in Bumthang 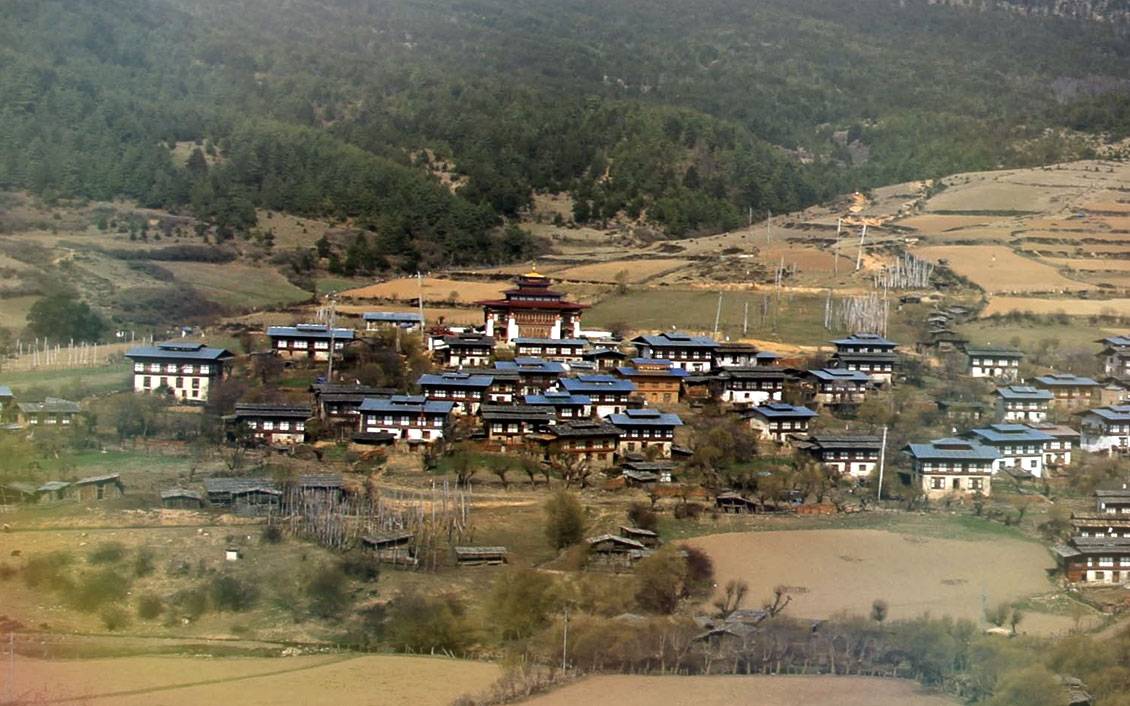 Bumthang is a district in Central Bhutan. It is known for its four major valleys: Chokhor, Tang, Ura and Chhume. As a part of a conventional Bhutan tour, Bumthang is meant to be an enlightening short but insightful odyssey but not much focus is put upon exploring this magnificent place. 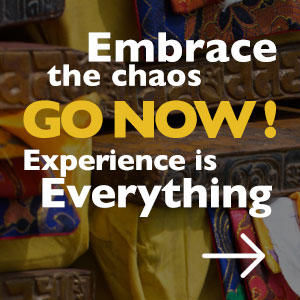 You will need more time, more focus, to pass through this dramatically beautiful region and learn about its fascinating medieval history, deeply religious roots, and incredible scenery that redefine your notion of Bhutan as a travel destination. With its innate natural beauty and fascinating cultural legacy, Bumthang is celebrated in myth and legends and where a hidden world of traditional richness is found through villages perched above dramatic hillocks mingled with meadows, forests, medieval religious centres and the sounds of exotic Himalayan birds.

You can reach Bumthang from Thimphu via road in 4 hours. From Trongsa, it will take about 2 hours. We have considered aspects like scenic views, culture and ease of access and come up with the best places to visit while you are in Bumthang. 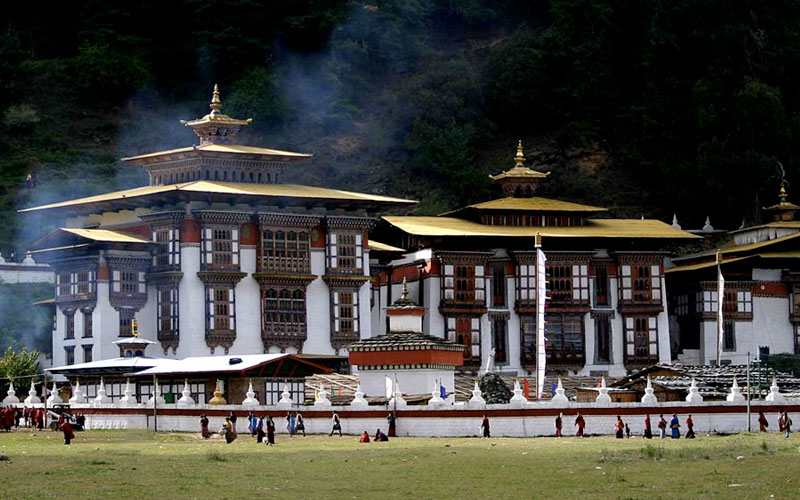 Kurje Lhakhang is one of the most sacred monasteries in all of Bhutan. Legend has it that Padmasambhava (Guru Rimpoche) meditated here and left the imprint of his body upon a rock. “Ku” meaning body and “Je” meaning imprint, in Dzongkha, a place that marks the victory of Dharma over evil, and what has defined Bhutan over many centuries.  The Kurje complex is made up of three buildings that all face south. The first building on the right is the oldest and was founded by King Sendha of Bumthang after his conversion to Buddhism. This structure was rebuilt in 1652 AD. Sampa Lhundrup, the second temple was constructed in 1900AD by the first King Ugyen Wangchuck. The temple houses a giant idol of Guru Rimpoche, after the counsel of Bakha Tulku, a monk of the Nyingmapa sect. In 1990, another building was added and was called the Ka Gon Phur Sum Lhakhang. This was done to honour the fourth King’s wishes to house the sacred idol of Palchen Heruka. Amazingly this temple is also the resting place of the first three kings of Bhutan. A large tree stands behind the temple buildings. Believed to have been planted by Guru Rimpoche, this marks the time of subjugation of evil spirits and where the wheel of Dharma was turned for the very first time. Kurje Lhakhang is 5 kms north of the district headquarters and is located on the right bank of the Chamkhar River. Its enclosure is made up of 108 Chortens.

Jakar Dzong is an imposing fortress. It is a reminder that tracing the routes of erstwhile monarchs, their armies, monks and pilgrims offers a connection back to the past. A trip to Jakar Dzong is like following their formative footsteps, bringing their history to life. It is said that in 1549 AD, before Lam Nagi Wangchuk set off to build the Dzong, a white bird suspiciously perched upon the land, designated for building. Considered an auspicious sign, Jakar Dzong came to be called “Castle of the White Bird” and stands today as a great example of Kagyupa Buddhism and Bhutanese architecture. Historically, Dzongs played an important role as the fortress of defence of their particular principalities. Jakar Dzong is about fifty meters high. The central tower of the Dzong is an uncommon feature and is unique to only this Dzong in all of Bhutan. The Dzong has a sheltered passage, with two parallel walls, interconnected by fortified towers, which gave the people within the fortress access to water during a siege. The protected water supply is still intact. Jakar Dzong is commonly known as Jakar Yugyal Dzong, which stands on a hilltop above the Jakar village. It is located adjacent to the main town of Jakar

Jambay/Jampe Lhakhang is one of the 108 famed monasteries that the Tibetan King Songsten Gampo built across the Himalayas in the 7th century.  This is a single storey complex built on a plain above the Chamkhar River and is situated at a distance of four kilometres north of the district headquarters. The main sanctum sanctorum is a small middle shrine with a circumambulatory.  This contains a large idol of Maitreya Buddha, adorned on either side by the idols of four Bodhisattvas. On one side of the doorway leading to the shrine is a painting of the historical Buddha while a painting of the Eight Manifestations of Guru Rimpoche is on the other side. The circumambulatory walls are covered with paintings of the Thousand Buddhas and decorated with a long row of prayer wheels. Four Chortens (Stupas), each of a different colour, were built at the turn of the 20th century forming an inner courtyard. To the right, is Duki Khorlo, another sancutuary. The building to the north is in an extension of the same Duki Khorlo. The Guru Lhakhang forms the left side of the courtyard. It was founded by the Jakar Dzongpon in the19th century. The Sangye Lhakhang is above the main entrance of the complex.

Tamshing, a small one-storey temple surrounded by a beautiful village, is considered the most important Nyingma institution in Bhutan. Tamshing Lhakhang was founded in 1501 CE by Pema Lingpa, who is considered a great saint and spiritual master. Pema Lingpa’s religious teachings are carried out here, even today. The ground floor still contains the original 36 paintings that were made in the 16th century during the construction of the monastery. The sanctuary on the lower floor is dedicated to Guru Rimpoche and his Eight Manifestations. The upper floor ceiling is extremely low. Legend has it that Pema Lingpa was a short man and that his measurements were used to determine the structure of this floor. Both the floors are adorned with beautiful paintings that range from a master’s lineage, to a gallery Buddhas and the feminine emanations of Avalokiteshvara. The main temple of the upper floor is commemorated to Buddha Amitayus whose statue graces the inner sanctuary. The right hand wall is decorated with a painting of the primordial Buddha Samantabhadra, the one among the Sakyamuni trinity. He is surrounded by the Four Bodhisattvas and several distinguished Nyingmapa lamas. In the 8th month of the Bhutanese calendar, a festival called Phala Choedpa is celebrated in the courtyard and for 3 whole days where ritualistic dances take place. This is a tradition started by Pema Lingpa himself.

Mebar Tsho, also known as the Burning Lake, is only 30 minutes away from the town of Chamkhar. This lake holds great religious significance to the people of Bhutan. It is believed that Padmasambhava (Guru Rimpoche) had hidden sacred scriptures inside the lake, and was later recovered by Pema Lingpa in the 15th century. To retrieve the scriptures he immersed himself into the water holding a lamp. When he resurfaced, the lamp was still burning! The burning lake attracts pilgrims and tourists alike, today. A series of multi-coloured flags surround this region and there is an altar dedicated to Pema Lingpa. Devotees offer butter lamps at the lake and at night the lake glows with uncommon heavenly beauty. This lake has an almost dark hue and no one really knows the depth of this lake. There are abundant tiny offerings called “tsha-tsha” piled up in various rock niches. The lake is a magnificent work of nature and is renowned for its beauty and the serenity that one feels around it. A visit to this lake, while in Bumthang is a must.