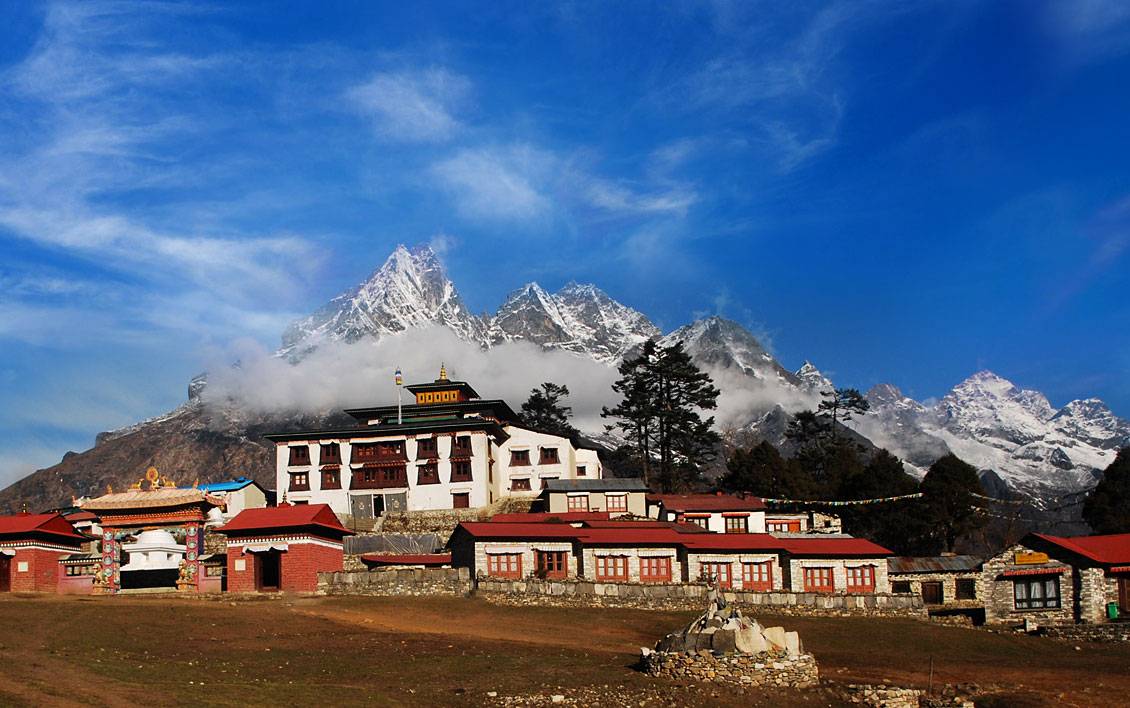 In 1934 an earthquake caused severe damage and on the 19th January 1989 the monastery burnt to the ground. The fire was so intense that nothing of worth could be recovered.

While the trail to Everest may mostly be about adventure and ascents, Tengboche’s surreal spiritual presence somehow fits in with the dramatic tone of the area. Its high whitewashed walls, set across the rugged beauty, overlooking the harsh trail, possesses symmetrical shapes contrasted by the coarseness as well as the beauty of Everest itself, while its muted colours blends seamlessly with its surroundings. This is one of the holiest monasteries in the Khumbu region and has a long history of reverence and destruction. This is a Sherpa monastery established in its present site by Lama Gulu in 1916 and with the help of local monks from the Solu and Zhung villages. Unlike many other monasteries, Tengboche initially ran on very low resources and funds. Tengboche has been destroyed and rebuilt twice.

In 1934 an earthquake caused severe damage and on the 19th January 1989 the monastery burnt to the ground. The fire was so intense that nothing of worth could be recovered. Most of the monastery’s precious old scriptures, statues, murals and woodcarvings were lost to the fire. Even the famous stone in which Lama Sangwa Dorje left a footprint, cracked in the heat. It took three years to complete the construction of this now famous structure. After the fire, along with many individuals and organizations, even Sir Edmund donated time and money to rebuild the monastery. The new building sits on the same plot of land as the last but is made of rock rather than wood to minimize the chance of another catastrophic fire. A team of painters led by master painter Thake La worked for more than two years to complete the colorful artwork that fills the main prayer hall today. The monastery that has replaced the older one after the fire is larger than the old one and is built in stone rather than wood. 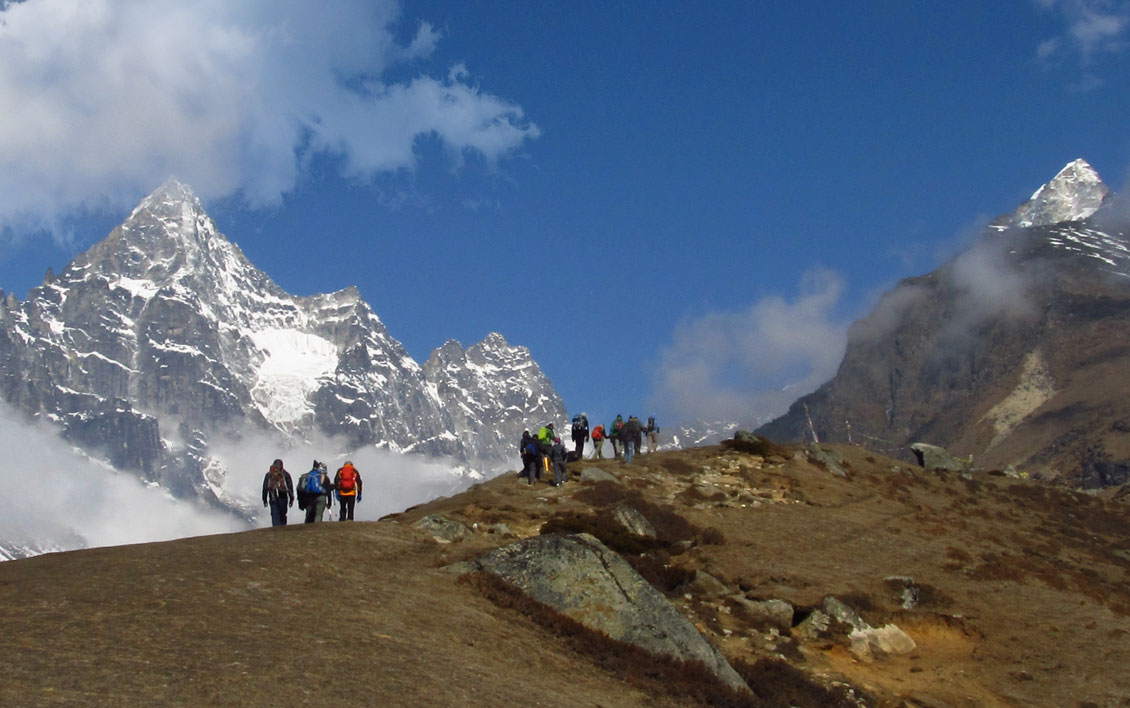 It was only 350 years ago that Lama Sangwa Dorje brought Buddhism to the Khumbu Valley and established the first monastery in Pangboche.

The courtyard and storerooms are larger to provide more room for the monks and their rituals. “Do-Khang”, the prayer hall in the primary building contains a gigantic idol of Sakyamuni (Gautama Buddha), adorned by the idols of Manjushri and Maitreya Buddha on each side. Behind these idols stands an ornate wooden frieze that was saved from the devastating fire in 1989. The scriptures of the Kagyur are placed nearby. The Kagyur scriptures are the original teachings of the Buddha translated into Tibetan.

Considering Nepal’s Buddhist heritage, the advent of Buddhism in the Khumbu region started much late. It was only 350 years ago that Lama Sangwa Dorje brought Buddhism to the Khumbu Valley and established the first monastery in Pangboche. In 1916, Tengboche Monastery was built by Chatang Chotar, also known as Lama Gulu, as a place where monks could follow the Nyingmapa version of Vajrayana Buddhism. At present there are 60-70 monks within the Tengboche Monastic community which is gradually increasing. The monks take turns performing various duties necessary for the running of the monastery. There are prayer ceremonies to lead, discipline to be maintained, the kitchen to run and many other duties. The older monks will hold positions of larger responsibilities while the younger monks help by collecting wood, shopping and serving tea. 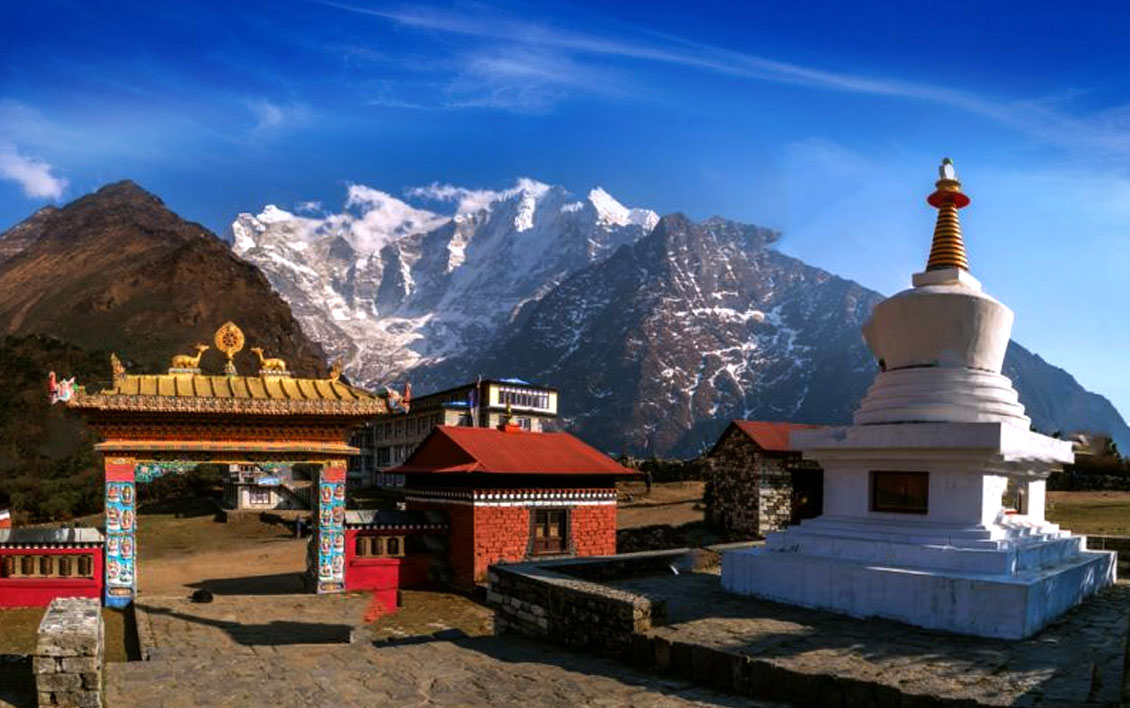 The monks congregate together twice a day for meditation and prayer and many rituals held at Tengboche but nothing compares to the grandeur of the Mani Rimdu festival. At Tengboche, the Mani Rimdu is performed in the 9th Tibetan month which usually falls in late October and all rituals follow the tradition of Rongbuk monastery in Tibet. The name comes from "Mani", which is a part of the chant of Chenrigze, and "Rilbu" which are the tiny red pills, blessed throughout the ceremony and distributed to everyone at the end. The ritual starts with a beautiful and intricate Mandala, which is a spiritual and religious diagram that is made from coloured sand. It takes about four days to complete the Mandala, which is then covered and used as a focus for a ten day period of meditation. 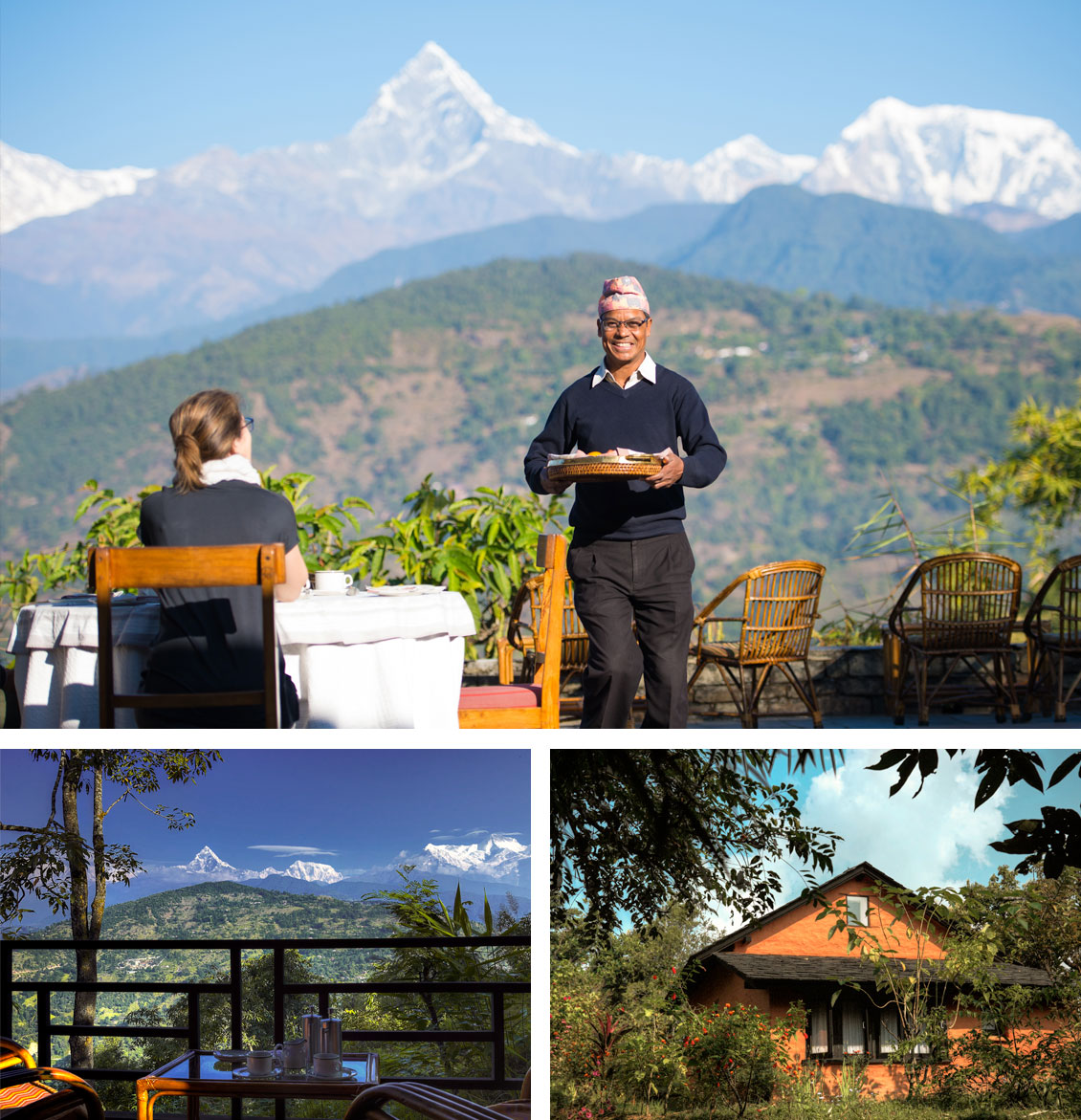 At the end of the ceremonial rituals, the monks perform sacred masked dances called "Cham" There are sixteen dance sets in total, with some comic interludes that entertain the crowds. These dances are a recreation of the beginning of Buddhism in the Himalayas by Saint Padmasambhava, known as Guru Rimpoche. The dances depict Buddhist teachings imparted to mankind for a better world. Throughout the dances, symbolized demons are vanquished. On the last day, the monks gather for a fire ceremony which is performed to ward off all the negativity in the world. Afterwards the sand Mandala is symbolically taken apart and positive energies are sent out to the world for the benefit of all sentient beings. In this remote and spectacular monastery at the top of the world, this custom has persisted since the very start. The sacred masked dances of the Mani Rimdu are performed for all and international visitors are welcome to witness them.

Even by the extraordinary standards of a trek to Everest, the spectacular Tengboche monastery is a remarkable sight to behold. Just as remarkably, you can witness it close-up as the trail draws you astonishingly near. It’s an incomparable experience – as is reflecting on it at the end of the day in the comfort of your camp after a long walk up to the most breathtaking sights in the Himalayas. In the multilayered wilderness of Nepal’s far alpine corners, mountains rise, rivers meander and the thick forests are filled with notions of Nirvana and where man’s quest for spirituality ultimately finds fulfilment! Ancient Buddhist traditions, a rich cultural heritage, and an impossibly beautiful landscape perfectly converge in and around Tengboche and is an amazing place to explore, immerse and retain all along your path to Everest.