Into Thin Air - Pathway To Heaven 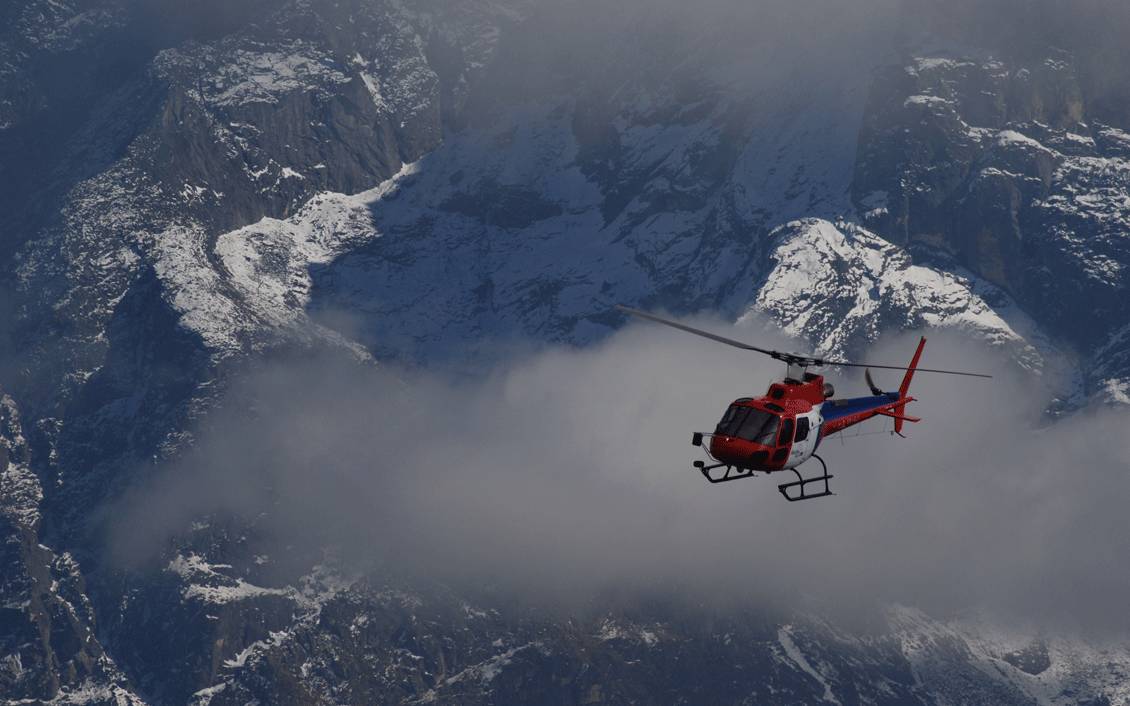 The Himalayas are regarded as sacred power places on earth. They are revered for their spiritual benefits and this translates, literally, into the “Abode of the gods!” There is a spirituality and wonderment in these peaks that haunts the insignificance of mankind. There is something magical and wonderful about the Himalayas!.

The early morning was crisp and clear. A few clouds scudded across the blue sky. I had checked in with the helicopter crew and was told it would be a few minutes. This time gave the crew a chance to check the weight and other items before we departed. As we approached the landing strip at Lukla, it suddenly struck me just how busy the small airfield was in the early morning hours. Planes and helicopters appeared to vie with one another for a space, both on the ground and in the air. Morning was the best time to fly into Lukla and I quickly realized the need for a cut off time to fly the 40 minutes from Kathmandu to Lukla. I wanted to try, this time, to see the grandeur of the Himalayas on a crisp, clear day. 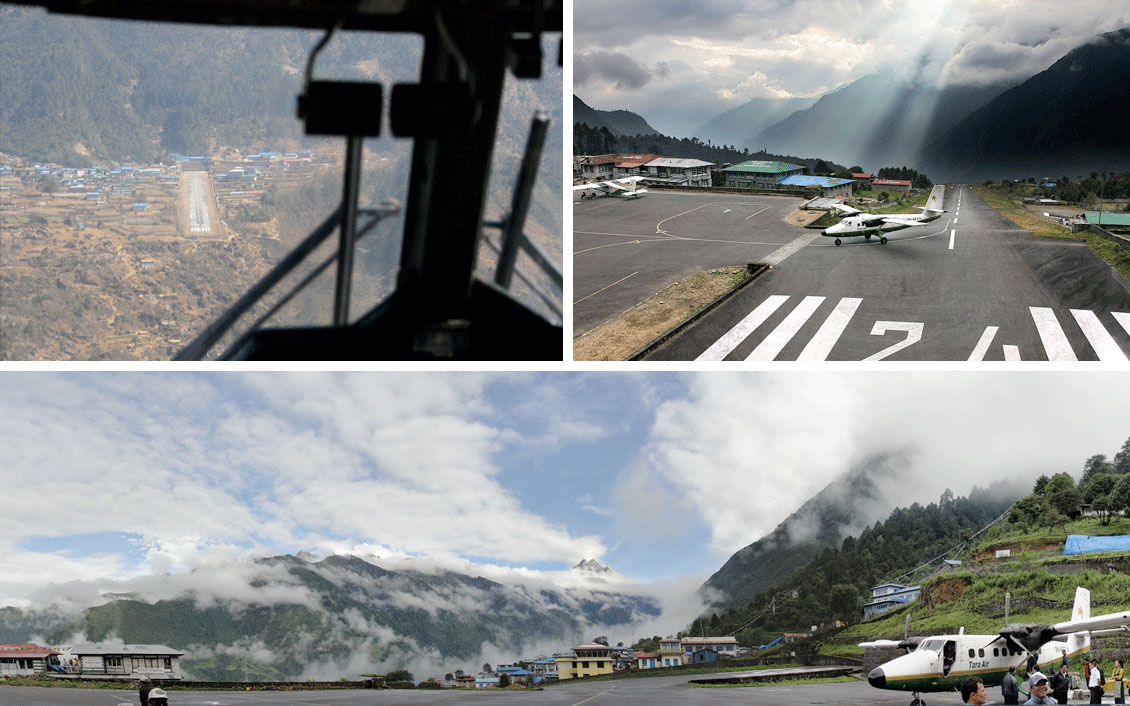 Lukla Airport (Tenzing–Hillary Airport), built in 1964 considered among one of the dangerous airports in the world but I never felt that dangerous in my early days. A program titled The Most Extreme Airports, broadcast on the history channel in 2010, rated the most dangerous airports in the world for over 20 years. A gateway to Everest where most people start Everest Base Camp Trek. There regular flights To/From Kathmandu.

The mountains did not disappoint! After a 40 minute flight over many different villages, the helicopter landed at Lukla Airport in the Solu Khumbu region of Nepal. This region is considered the cradle of Sherpa culture, home to the legendary Sherpa people of Nepal. They are famed for their historic treks and climbs of many of the Himalaya’s highest peaks. They also accompany and lead many groups of climbers up the mountains, including the Mt. Everest! The ideal time to fly into Lukla is in the morning hours. It is at this time that the light and shadows are the most spectacular on the mountains! I walked up to the Lukla Airport office to visit my friend. He talked a great deal about the expansion of the airport, and an increase in the capacity of the airport to handle upwards of 400 passengers. 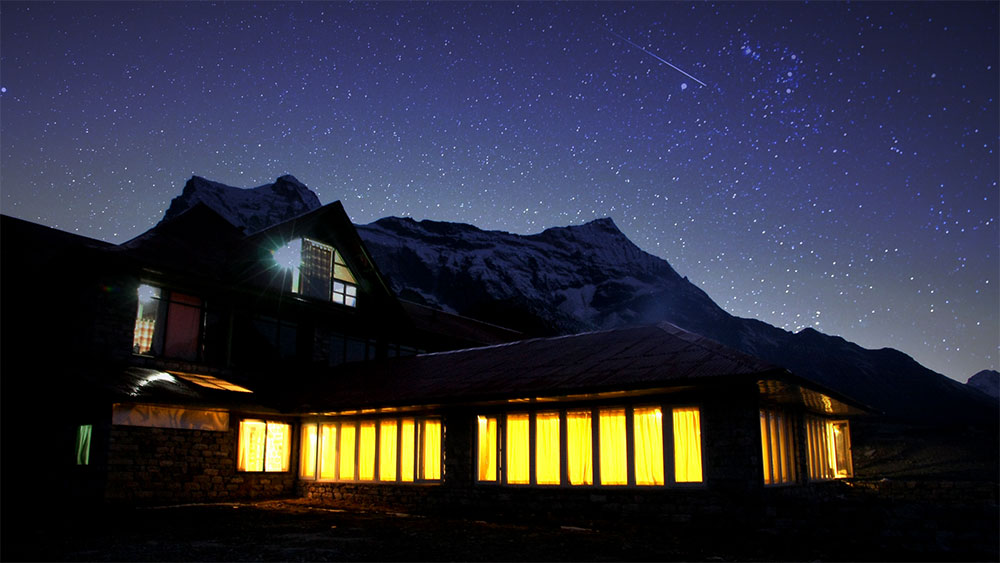 His office is small, but cozy. A single window faces the runway with unexpected and stunning views of planes and choppers landing and taking off. From this vantage one can see all the flights landing and taking off. I sip a cup of tea and watch clouds moving over Konde - Ri. I watched a pilot near the runway below, waving his hands. I can read his lips as he shouts, “Let’s go!”

Generations of explorers have taken several weeks, or even months, to reach these heights! Although only 50 minutes from Kathmandu, one must achieve this location to overnight at 13,950 feet. This is an increase from 4,430 feet.

The next adventure would be to land at Kongde for an overnight. A beautiful experience! The weather in this region commands no respect. While landing, a moment ago, the deafening clatter of the helicopter blades made a similar sound as if there was an avalanche! We had arrived just below the Konde - Ri Summit. Now, I am having a cup of butter tea in a small room with a fireplace. I can only hear the chanting of Om Mane Padme Hum, a Buddhist chant in the background. For an hour, I absorbed all the energy of the world. I strolled around and waved at a monk who was burning fresh, dry juniper as incense on cones. It is believed that those juniper trees are the hairs of a Buddhist leader and if they cut live wood, dry it, they will face no illness or bad luck. 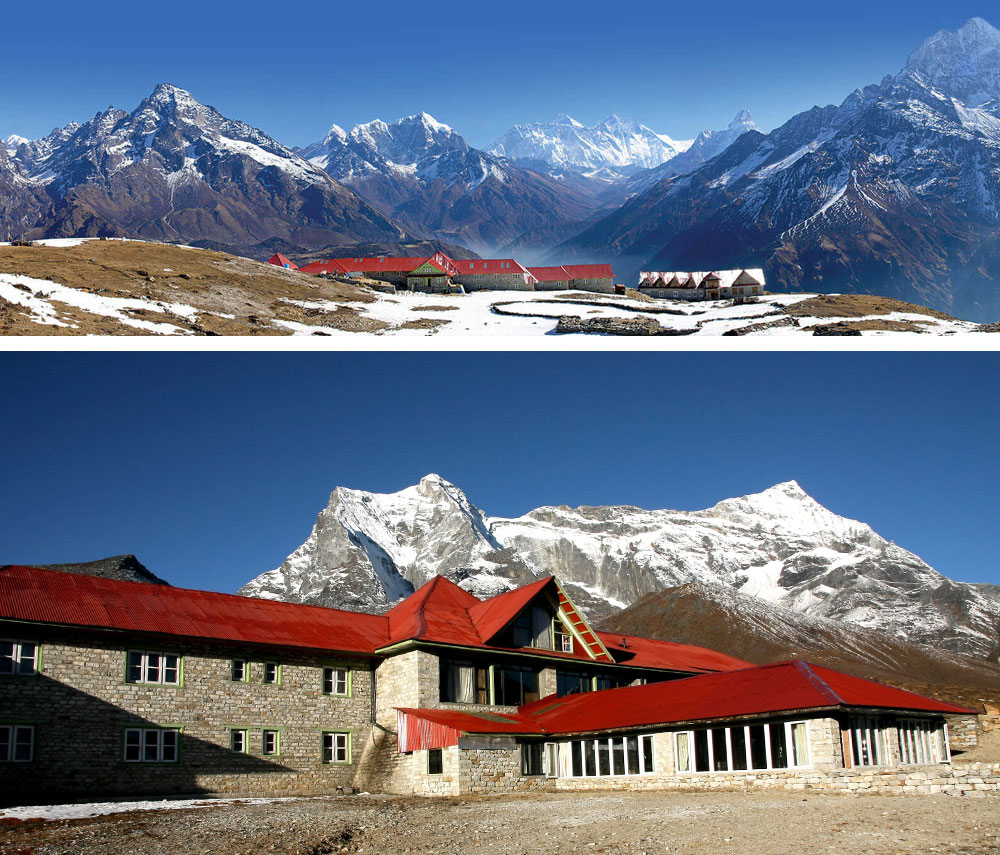 The Himalayas are regarded as sacred power places on earth. They are revered for their spiritual benefits and this translates, literally, into the “Abode of the gods!”

I suddenly felt the temperature swiftly drop and ghostly mists rose from Phakding and Namche, villages hidden by the rising mists. My breath grew shallow, pressure in my head increased and the altitude popped my ears! I ended up in a hall with a glass of thick, garlic tea – garlic it is believed to help thin the blood and enhance the flow throughout the body. At this point I did a quick body scan: I shook my head – no headache; I checked my stomach – no nausea; My respiration was smooth and deep now.

The wind, outside, suddenly stopped as if someone had hit a switch and all fell silent. Mt. Ama Dablam removed her veil of clouds and flashed an expansive smile of pure snow, rock and ice. Mt. Everest, with its symmetrical shape was mesmerizing. The whole new vista opened up, causing me to scream or in the excitement lose my dinner. I was without a thought and completely speechless for the longest time.

The Himalayas are regarded as sacred power places on earth. They are revered for their spiritual benefits and this translates, literally, into the “Abode of the gods!” There is a spirituality and wonderment in these peaks that haunts the insignificance of mankind. There is something magical and wonderful about the Himalayas!

My respiration remained rapid and my heart boomed a techno beat in my chest. Yet, I feel calm, content, and blessed to be here at all. Because of this wonderful environment, I truly discovered myself. There was something truly magical and wonderfully intangible about this place. A feeling that I know goes back thousands of years to the very first men who stood in this vastness that is the Himalayas.

Breakfast with gods in heaven

As the magnificent sunrise began, the Khumbu Valley is bathed in a golden halo. My spirits soar as I gaze heavenward in a silent rapture.

I awoke the next morning to the quiet stillness that seems to pervade these mountains. The tranquility of the dawn, the challenge of a new day, and the promise of so many new and magical experiences that await you. It is an awesome feeling to see the guardians of the Himalayas from this vantage point. There are four of the tallest mountains in the world and they have been labeled the guardians of the Himalayas! Mt. Everest, 8,848m/29,029 ft., Mt. Lhotse, 8,516 m/27,940 ft., Mt. Makalu, 8,481m/27,838 ft., & Mt. Cho Oyu, 8,201m/26,906 ft.. All of these Make you feel supremely happy. Mt. Everest is glowing with its eternal reflection and its radiance. Mt. Ama Dablam, dominates the skyline with its colossal body covered with sparkling, white snow which only increases its beauty and majesty.

As the magnificent sunrise began, the Khumbu Valley is bathed in a golden halo.  My spirits soar as I gaze heavenward in a silent rapture.

Breakfast is served with Moet and Chandon champagne and becomes a celebration in the shadow of this holy mountain which stretches across the infinite horizon.

Flying over Everest Base Camp and Kalapathar

The sound of a helicopter shatters the morning stillness.  Rising up from the valley below, it signals an end to our enchanting and mystical rendezvous with these spectacular mountains. There is little time to think on the experience, yet I know that I will think back on all of this as I return to the modern world.

The next stop is Kalapathar.  Here the helicopter does not turn off its rotors, but allows them to stay engaged. If the motor should die we would be stuck in this altitude, and cold.  The chopper would not be able to restart again because of the lack of oxygen and the extremely cold conditions.

Namche Bazaar spread out below the chopper, was stunning. Syangboche, the Everest View Hotel and then the incredible Tengboche Monastery, Gorekshep, was a real eye-opener as Buddhist shrines, chortens, and Sherpa villages dotted the seemingly endless flow of this vivid, surreal landscape.

Mt. Pumori seems like it is a welcoming signal to every helicopter and passenger plane returning from the mountains. As Kalapather (5,550m), it was an awesome experience to land there, and although the chopper kept its engine running, the beauty and the silence seemed to quiet the noise.