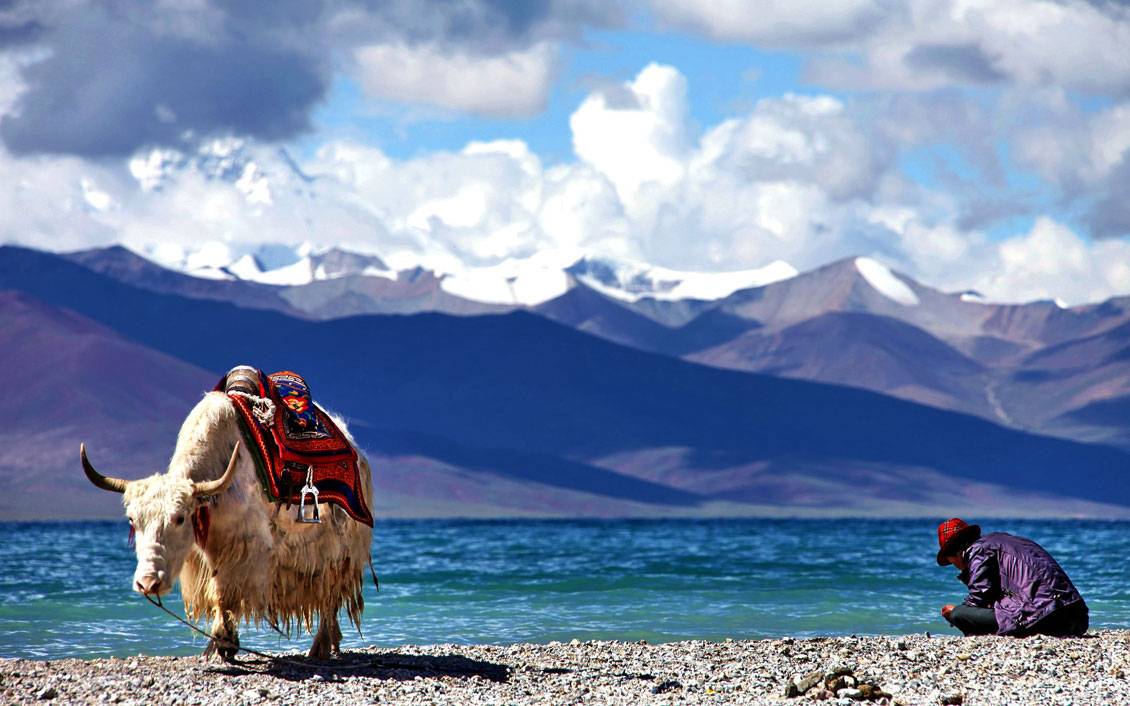 Each morning, suspended over Namtso Lake, one can watch the sun and the sky play their wistful early rays upon the sparkly blue waters and transform it into various shades and hues. Within a few moments, the water glows. Bathed in long, lazy beams of the early sun, the shimmering lake reflects back a bright radiance that makes the atmosphere hum with vibrant, animated awakening. Namtso Lake is heavenly, which is also what the name means in the Tibetan language. Among tourists who have long been enamoured by the natural beauty of Tibet, Namtso or Nam-Tso has held sway, beginning with the advent of Heinrich Harrer and Peter Aufschnaiter in 1944. It also has a Mongolian name –Tingrli Nurr, which means “Heavenly Lake”, for it is truly divine and the waxing and waning of the celestial moon makes its waters rise and fall. Namtso is a salt water lake that is situated on the border between Damxung County and Bangoin County in Tibet. 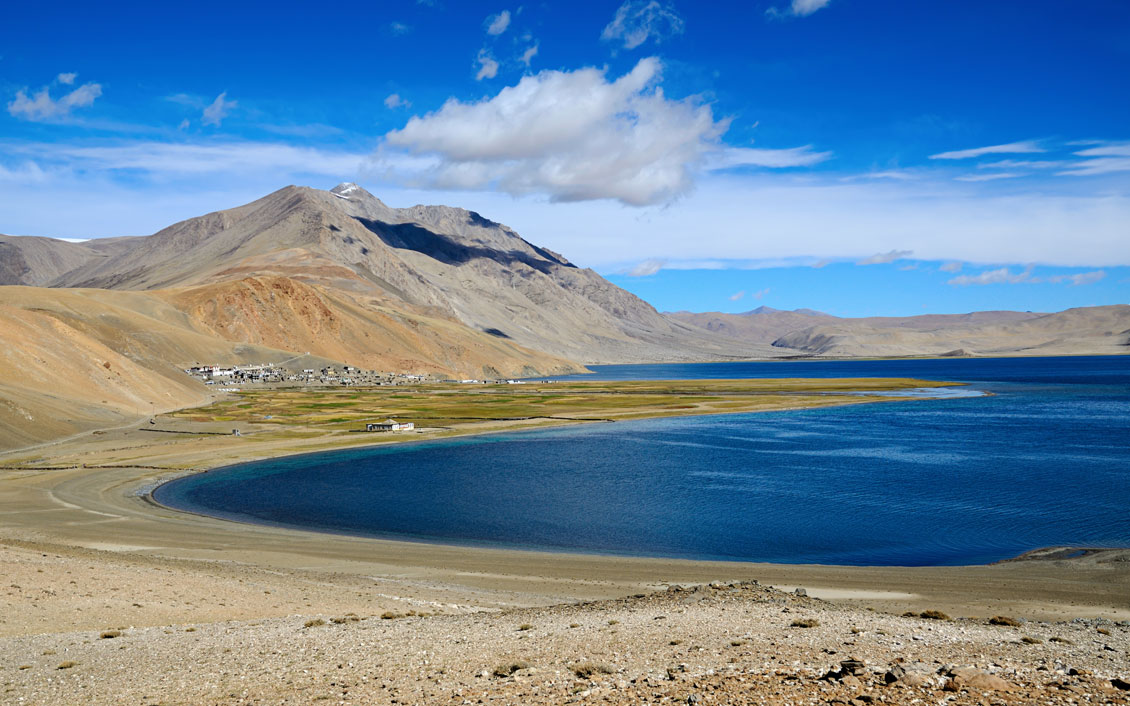 The lake is roughly 70km long and 30km wide with a surface area of 1,940 sq. km. Pilgrims who circumambulate the lake require about an entire month to do so for some pilgrims! Namtso, at 4,718 metres above sea level, is the highest lake in the world beating Lake Titicaca in South America by 900 metres! The lake is about 35 metres deep. You can make a drive to Namtso along a paved road from Lhasa where you cross Yangbajing (4,155m) which is a small settlement to then reach Damxung at 4,200m, a small recently build Chinese town 170km away from Lhasa. At 40km from Damxung, you can reach Namtso Lake. There are two routes to reach Namtso from Damxung. One is via Largeh La pass at 5,180m and the other is over Kong La pass at 5,150m. Trekking up to the Namtso Lake is also a delightful adventure activity.

Equally compelling are the surrounding regions of Namtso Lake. The magnificent Mount Nyenchen Tanglha, at an elevation of 7,162m looms large, along with a shorter mountain of the same name nearby. Legends say that the shorter mountain is the son of Namtso and Mount Nyenchen Tanglha. The beautiful peak imbibes the colour of sunshine, radiating the entire serene wasteland and creates a marvellous atmosphere of ethereal beauty. The hills open to the breeze that touch the Lake’s waters with a whisper of sounds coming from the small tides that hit the shores. It is this beautiful amalgamation of sights and sounds, spirituality and devotion that gives rise to legends and lore that continue to shape and enrich Tibet’s cultural treasures. 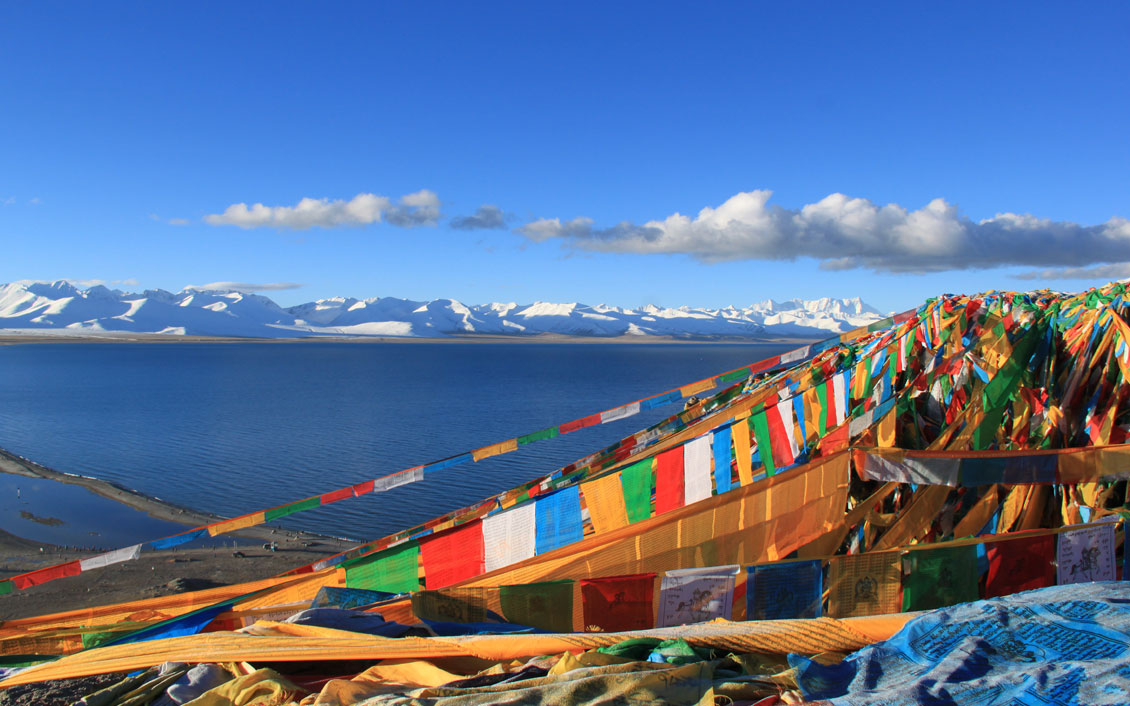 Legend has it that the sacred Mount Nyenchen Tanglha is a divine deity and a guardian ordained by the great Guru Rimpoche (Saint Padmasambhava) himself and was also a protector of King Trisong Detsun, the propagator of Buddhism in Tibet. But though the sacred mount Nyenchen Tanglha is an endearing combination of benevolence and compassion, he is not devoid of vices, and jealousy is his greatest weakness. By his side, the aforementioned lower mountain, his son was once growing taller each day. Outraged with jealously Nyenchen hollered, “I’ll will make sure that you will not grow an inch taller”, and smacked him so hard that he stunted the growth of the little mountain.

In the days of magic and mystics, Mount Nyenchen Tanglha and Lake Namtso were married and they lived in harmony and were endowed with immense wealth and power subduing all demons and even the powerful Gods. They stood above everything else. The prairies nearby that lay barren today used to be their pastures, and the adjacent mountains, their servants in charge of grazing their animals as well as feeding their dogs and grinding their barley.

But in a moment of weakness, Lake Namtso began a love affair with Mount Boji and bore a son by him. The holy mountain was miffed with this infidelity and his jealousy and rage caused him to cut off the legs of Mount Boji, crippling him forever. Thus Mount Boji, even today is lying prostrate in Tibet’s southern spurs, and the festering wounds in his legs have transformed into valleys and passes that became a trade route for anyone traveling to Shigatse. Much later, feeling profound regret, Nyenchen Tanglha built a hundred pagodas and a hundred springs as an apology to the crippled lover. To this day one hundred earthen mounds, the remains of the pagodas can still be found near Namtso Lake. 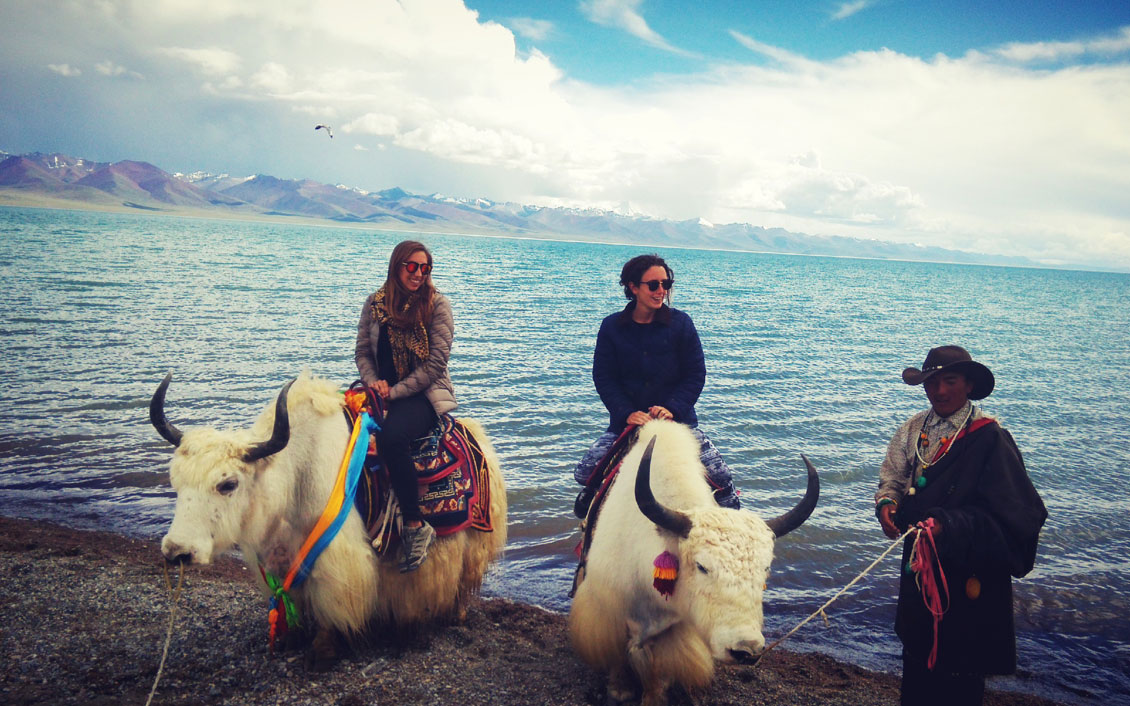 It is no surprise that Tibetan's believe in legends because to them, all things in nature are guided by spirits. That the world around Namtso is drawn by reason that asserts itself to guide humanity to a set of moral principles that adheres to the teaching of the Buddha is the prevalent notion. Yet no teaching is complete without nature playing the ultimate part. These grand, legends are designed to be adored, and to be followed with devotion. Namtso epitomizes that ideology. Buddhists invariably try circling the lake but they must stop at a certain spring to drink from the sacred water and hair and face are washed with it. But it is in the year of the Sheep that the circling of the lake is most efficacious and the blessing, multiplied. It is said that Namtso Lake came into existence in the year of the Sheep and the Buddhas, Bodhisattvas and Vajra Yoginis will gather in the year of the Sheep each time.

There is a mountainous peninsula across the lake called Tashi Dor whose landscape eroded by water gave rise to towers, arches and caverns. There are two separate chapels in Tashi Dor. The first chapel is smaller but spacious. The main statue of Luwang Gi Gyalpo (Nageshwaraja), the King of the Snakes venerated in Hinduism and Buddhism stands in this chapel. There is a heavy stone here, representing Nyenchen Tanglha that pilgrims try lifting to test their sins. The second, main chapel, also known as the Tashi Dor monastery, features a central Guru Rimpoche statue and the trinity of Opagme (Amitabha Buddha), Boshisattva Chenresig and Vajrapani, collectively symbolizing their vows to liberate sentient beings until the end of Samsara (the cycle of life and death). There are also personified idols of Nyenchen Tanglha on a horse and the blue-faced Namtso, the goddess of the lake, who rides a water serpent. There are several other chapels and retreats honeycombed into the adjoining cliffs. 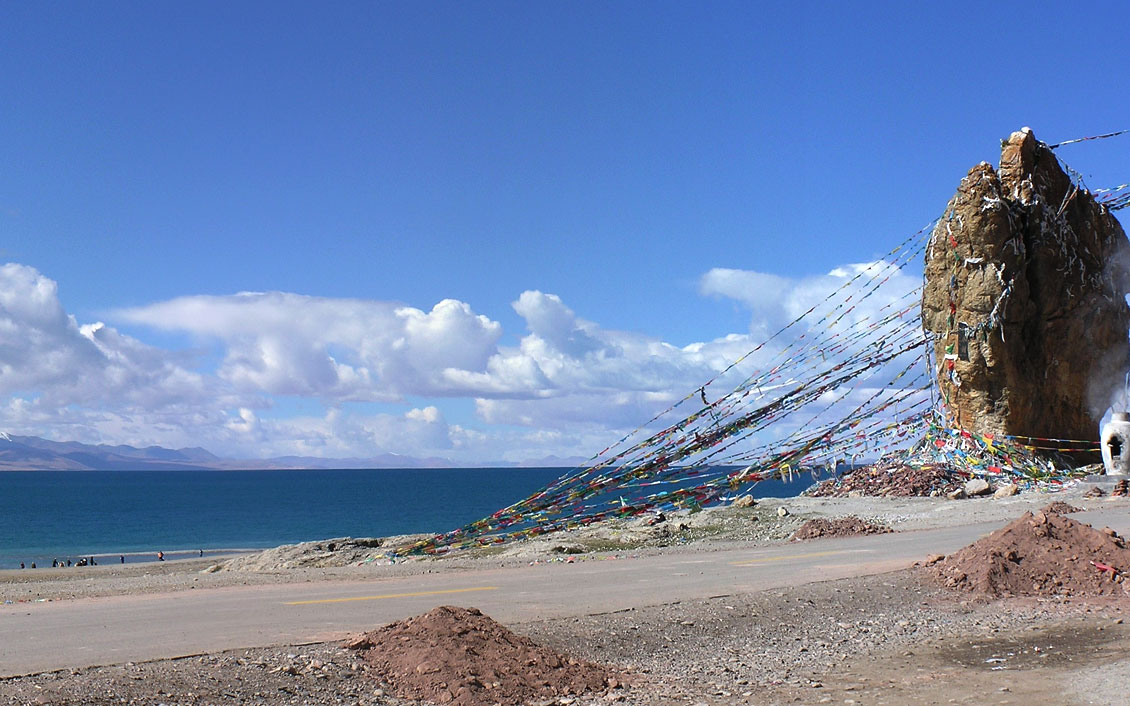 Also, at a certain point on the lakeshore there are two vertical stone pillars, each rising thirty meters and eight meters apart. These rock towers are also considered to be sentinels for the region. One has an archway, through which those who have committed the cardinal sin of killing are forbidden to pass and those with a history of petty crimes on their records who attempt to squeeze through will be chastised. Tibetan pilgrims believe that it is the omniscient gate deity of the Namtso Lake who makes this judgement. This belief takes root in Bon faith which is still influential in many parts of Tibet.

Mani piles (rocks with scriptures) are found everywhere around the Namtso Lake. These heaps of stone that are created for religious worship have over the years amplified gradually both in size and number so that in places they now link together to form Mani walls, each of which may be over a hundred metres in length and a metre in height. These rocks have the six syllable mantra “Om Mane Padme Hum” inscribed on them along with excerpts from the Buddhist scriptures. Whenever a Buddhist pilgrim comes upon one of these walls, he /she circumabulates the pile and adds a pebble onto it, symbolizing one cycle of scripture chanting. A Mani pile is called Duobeng, which translates to “a hundred thousand scripture stones”. Over the piles, hand sutra banners or Budhdist prayer flags of five different colours flutter in the wind.

They say that there are rocks around the lake that can cure digestive ailments, and a certain cave where a monk once meditated in seclusion to achieve enlightenment exists. Monks from the Kagyu and Nyingma sects occasionally occupy the caves in the area as a part of their meditation ritual. Pilgrims burn dried juniper incense to raise smoke on Tashi Dor and throw a piece of “Khada” or traditional scarf into the lake as a prayer or wish. If the scarf sinks, it implies that one’s wish is accepted but if the scarf floats on the water or only half sinks, it means that the individual has invoked bad karma through his deeds. Juniper incense is used by Buddhists to purify what has been offered on the deities. The purpose of the incense is also to create the causes to have morality, ethics and keep on to a vow and reflect on it. 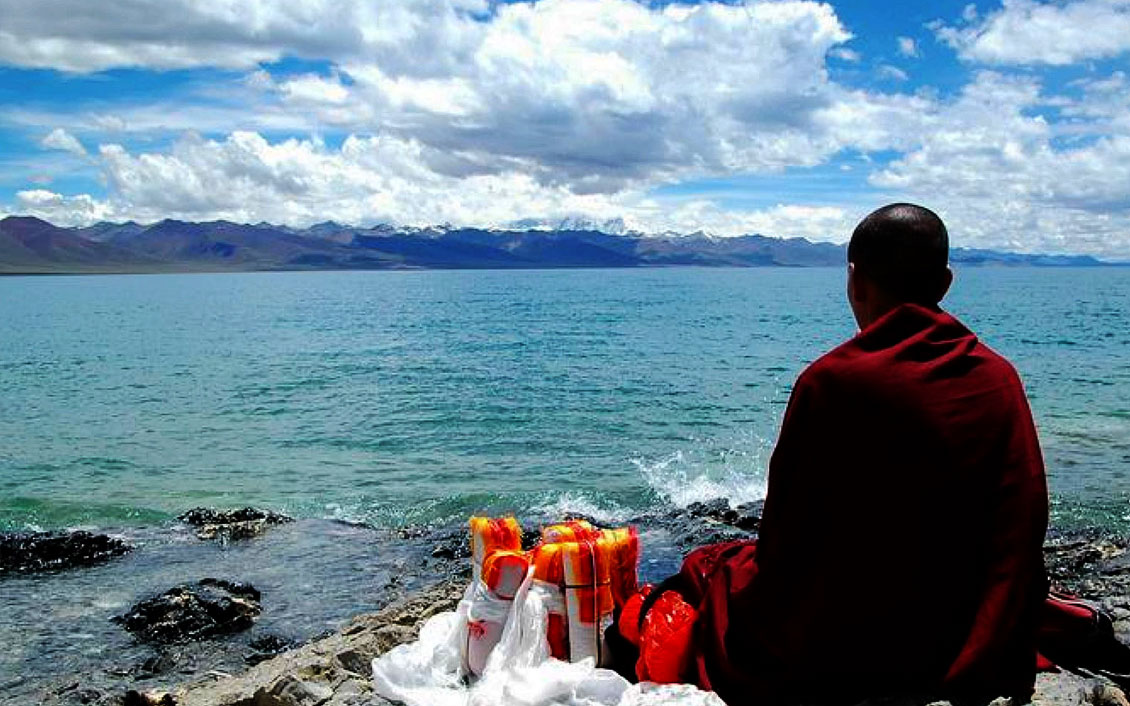 You can stay overnight at Tashi Dor for it is a long drive back. There are small cabins nearby where you can rent a bed. Staying near Namtso also gives you the opportunity to view the sunrise and sunset by the lake. Though Namtso is descried as a blue lake, it surpasses the blue tones almost every hour. It sometimes turns green, aquamarine, and sometimes dull grey. In the winter it freezes completely. It is as if the lake has a personality, a real spirit which is what must have encouraged the first pilgrims there. Once every twelve years, in the year of the Sheep, a great festival is held on its shores and innumerable pilgrims gather here. They circle it, burning juniper incense and prostrating themselves in worship of Her Holiness, the lake. Much like the pilgrims and the tourists, from spring to autumn, you can also see migratory birds including the black necked cranes which fly to Bhutan in the winters.

With a harmonious blend of shades, sounds, and smells, the ethereal water of the Namtso lake reinvents itself every day like enchanted trinkets that, when illumined, emits back a heavenly glow. Namtso is a captivating natural mosaic; a paradise for leisurely relaxation amid breath-taking settings. The views all around are spectacular. Mountains peeked above the hills as far as the eye can see, and glints of grey from the surrounding mounds wave at you. The lake does have a personality, an embodiment of the divine. For how is it possible that the same lake that you see today takes on a new form and a new meaning tomorrow?