At the foot of the glorious Mount Hepo Ri, on the shadow of untamed hills surrounded by staggering jagged peaks stretched out endlessly in one direction, Samye monastery sits like an oasis glistening in the Tibetan sun.

To the south, there is Yarlung Tsangpo, a meandering jade river that turns the surroundings to a spectacular realm, dazzling us in a moment with its vastness and rugged beauty. The Samye monastery is considered to be the oldest in Tibet but that is not the only reason why it’s important. Samye is about 38km northeast of Tsedang and a good 135 km southeast of Lhasa. The best way to reach the monastery is to take a private car from Lhasa which will take you about 3 hours. Locals use the daily bus from Jokhang square in Lhasa which is also a viable option. 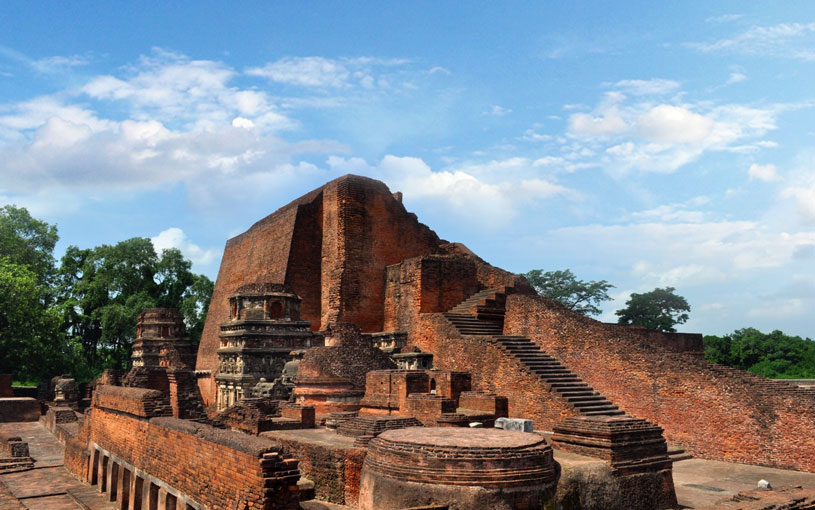 Nalanda University
Samye was built within a span of about 12 years from 762-775 CE, by Trisong Detsun the second Dharma king of Tibet (Tibet has three Dharma Kings, the Buddhism revivalists). He had assistance from Guru Rimpoche (Saint Padmasambhava) and Shantarakshita, an Indian Buddhist monk from Nalanda University1. Many local noble families and evil spirits were opposed to the idea of Buddhism in Tibet. Shantarakshita advised Trisong Detsun to invite a spiritual tantric guru to overcome these calamities. It was then that Saint Padmasambhava was invited to Tibet. Tantric history tells us that the original attempts to construct the Samye monastery had failed due to the demonic power of the antagonist Srin Mo, an Ogress. It is believed that Saint Padmasambhava cut off the head of the demon at a place called Lo Gekar and subdued her powers to set up the monastery at Samye. It is also believed that in Samye, Padmasambhava first drew thiks on the earth to invoke his powers and started the tantric dance. This dance was later emulated by the monks and was spread all over the other monasteries in Tibet. Today these dance forms are known as Cham dance, performed at almost all major monasteries around the world, commemorating the victory of Padmasambhava, the Guru Rimpoche, over evil.

The structure of Samye follows the Indian tradition that is a representation of Odantapuri, a Mahavihara situated in Bihar, India. Mahavihara is a Pali term for “Great Monastery”. Odantapuri Mahavihara was the second oldest Buddhist University in India built in the 7th century by a king of the Pali dynasty. Note: Siddharta Gautama (The Buddha) preached in the Pali language. There is an interesting story regarding the Indian influence on the architecture of Samye Monastery. The construction period of this monastery is also known as the Dissemination Period of Tibetan Buddhism. During the construction of the monastery, disagreements arose due to the dissimilarity in analysis, understanding and translation between Tibetan and Indian versions of the Buddhist scriptures. In the year 792 CE Trisong Detsun declared that a public debate would be held at Samye to decide on which interpretation was accurate. Shantarakshita had sent his student Kamalashila from Nalanda University to present the Indian perspective. Kamashila’s debate was with the monk Ho Shang also referred to has Hasang. Hashang’s debate was based on achieving enlightenment through emptiness of the mind while Kamashila argued that enlightenment can be attained only through practice and merit. The Indian argument had won the debate in the year 792 CE thereby ushering in 3 major changes in Tibet. 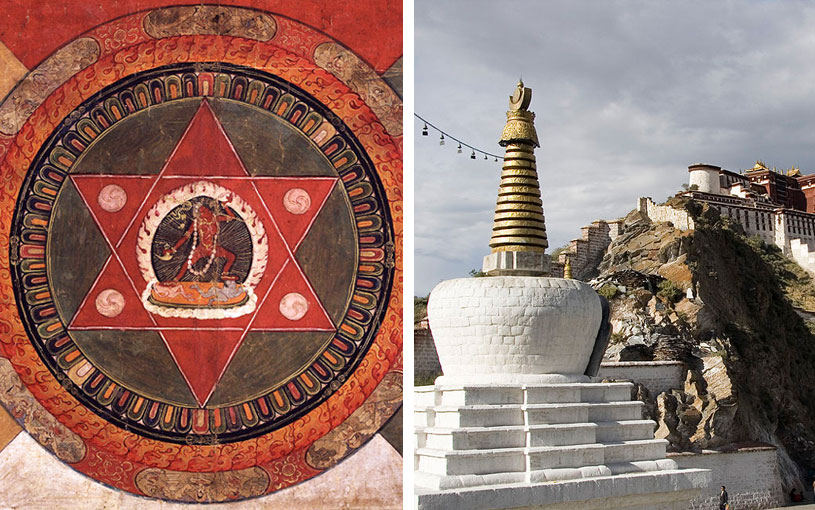 Painted 19th century Tibetan mandala of the Naropa tradition (Left). Chorten near Potala Palace, Lhasa, Tibet (Right).
The Samye monastery is a circular temple which is a symbolic representation of the model of the cosmos. The entire complex of the monastery has been designed as a Mandala2. It is a representation of Mount Sumeru which is considered to be the centre of the cosmic world. The layout of the buildings around the main hall is according to the layout of four continents and eight subcontinents in the Buddhist world. This temple is further encircled by 4 Chortens3 which represent the four worlds. Four groups of constructions and four Dagobas4 of different colours, green, black, red and white, are located respectively at the east, west, south and north sides.

Dhyani Buddhas (left). Mural of bodhisattvas (right).
According to Buddhist historical chronicles, the construction of Samye Monastery was done in accordance with Buddhist doctrines. The main hall in its centre, also called Uze Hall has a total of six storeys all of which include three architectural styles respectively- Tibetan, Chinese and Indian. This hall is composed of several units. There is the central Buddha hall, Sutra hall, circumambulation passage, passage, side halls and corridors. The Buddha hall is at the core of the entire construction, the centre of everything. It enshrines the idol of Vairocana, the celestial Buddha who is at the head of the Five Dhyani Buddhas5 and the Bodhisattvas6 and other Buddhist deities. The Sutra hall was constructed initially for study and even today it used by monks as a centre for learning and discussions. The arrangement of the circumambulation passages is for people to kneel or lay down on the ground before the Buddha and the myriad other deities with special powers and representations.

The monastery is encircled by a wall which is considered to be the representation of Mount Cakravada representing the Mount Chakravada which means that the monastery is protected by a symbolic iron fence. According to the Sutras7, Mount Chakravada is in the ninth position among the Ten Treasure Mountains8 of Tibetan Buddhism. The construction units of different heights and sizes are arranged flawlessly and in complete harmony. While the main temple and hall are both prominent features of this monastery, it still does not subdue the rest of the buildings in height, stature and symmetry. The architecture and the monastery’s uncanny resemblance to a Mandala make it look like each construction unit has become an inseparable part of one beautiful structure.

The Samye monastery consists of a total of 108 temples, an auspicious number which matches the Tibetan rosary beads used for prayer and meditation. Inside, there are beautiful and intricate frescos which fill the inner walls and a host of deities including the Buddha have been enshrined perfectly. There is one room in the Samye monastery which contains many masks of various deities, demons and celestial beings used in sacred ritualistic dances, a tradition started by the Guru Rimpoche himself. Among these various masks, one stands out as the most powerful among them all. This leather mask, which is believed to have been made out of coagulated blood (blood clotting), allows the dancers to become one with the deity that he is representing while the dance happens.

The temple complex of Samye is more than the stuff of fairy tales. It is symbolic of the Tibetan lifestyle of design rich and spiritual awakening that had been in practice for many centuries. One of the many temples in Samye is the temple of vital breath (the energy source). This is a sealed room filled with weapons. At night the Dharmapalas9 (protectors of Dharma) bring in evil spirits into this room. The evil spirits are the ones who hamper or hinder the process of leaving this world or finding another reincarnation. The Dharmapalas supposedly torture the ghosts to let them go from all attachments to the material world.

Scholars argue on whether Samye can be considered the first Buddhist monastery in Tibet. This is a debatable topic although many cite that while Songsten Gampo, Trisong Detsun’s predecessor had built temples 130 years earlier, they cannot be considered Buddhist monasteries because the Bon faith was still a predominant religion back then and no formal Buddhist institutions had been established before Samye came into existence. When Trisong brought over Saint Padmasambhava, Samye became of considerable importance to the Nyingmapa10 sect of Buddhism. However this monastery was later taken over by the other sects (mainly Sakyapa and Gelugpa) and has now become an important pilgrimage site for all Buddhists.

Many Tibetan monks study here and are ordained. Referred to have the seven examined men, these Samye graduates continue in the tradition of the great masters who have saved and preserved the Nalanda tradition over many centuries. Exploring the entire monastery will take you more than a few hours. There are many delightful murals hidden in the shadows with beautiful sculptures that represent the deities along with the three founding fathers: Shantarakshita, Padmasambhava, Trisong Detsun. The figurines of these founding fathers stand at the entrances as if to silently observe its visitors, the curious ones and the ones with faith with equal fervour; without judgement or admonishment. The main chapel is known as the Jowo Khang, which has an interesting figure of the Buddha at the age of 38. This was the age when the Sakyamuni Buddha (Siddhartha Gautama), after meditation had attained Nirvana and enlightenment.

Many of the temple portions of Samye require renovation time and again. Even though many winds have come across it, it has stood the test of time. Today, Samye seems to stand resolutely, because it illustrates peace and serenity and humbly reminds us that it is the cradle of Tibetan Buddhism that went on to touch millions of lives all around the world. The Samye monastery has been the fulcrum of Himalayan spirituality almost as long as there has been such a thing as spirituality. A visit to Samye is about discovering classic and holy sites - a few moments in Lhasa, a pleasant walk along the Yarlung Tasangpo, and the instantly dazzling structure of Samye. This visit must be about “letting go”, when you disintegrate your common notions, comprehensive perspective of the past and present and when you begin to understand a bewildering new world filled with nothing but absolute serenity.