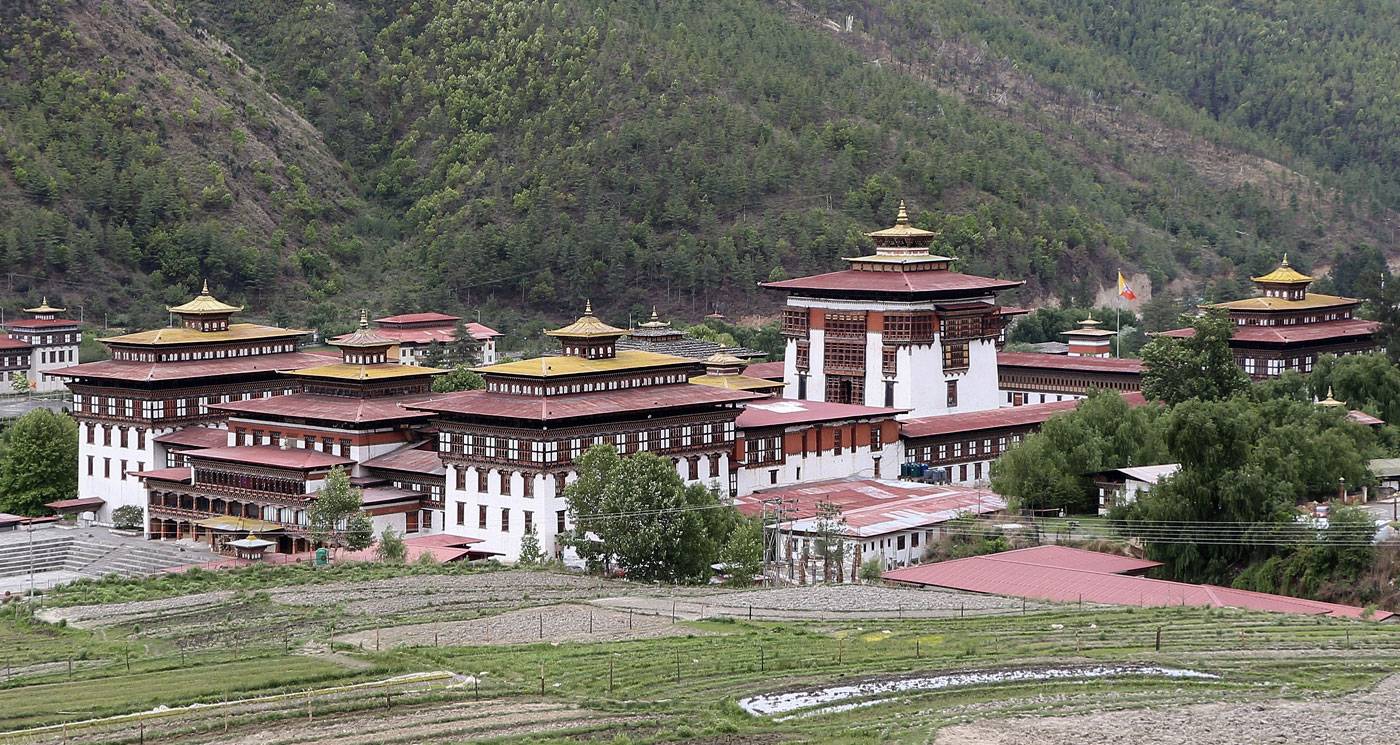 Many Dzongs were built in Tibet and Bhutan in the 11th century, to accommodate logistic functions but it also acted as a citadel that would shelter civilians during a war or a natural catastrophe.

Although the Dzongs of Bhutan were built many centuries ago, they are still in use today with political and religious utilities. Tashichho Dzong is one such fortress situated on the northern edge of Thimphu city in Bhutan, on the western bank of the Wang Chu River. Built in the year 1216 by Lama Gyalwa Lhanangpa, it was taken over by Lama Phajo Drukgom Shigpo within a few years to house many important scriptures and use it as a religious centre of the Drukpa Kagyu sect. In 1641 Shabdrung Nawang Namgyal (founder of modern Bhutan), acquired the Dzong from the descendants of Lama Phajo and renamed it Tashi Chho/Tashichho Dzong which means, the fortress of religious glory. Initially, the Dzong could only accommodate the monks and in 1745, it was enlarged to make room for government officials so that it could also serve as an administrative centre. The Dzong was damaged due to fire in the 19th century but was renovated to its previous condition.

The Dzong has two entrances from its eastern side. The south-east entrance leads to the administrative section and the north-east entrance leads to the monastic sector. The administrative section, however, is closed to visitors. When you enter the Dzong from the north-eastern entrance, there are painted frescoes of the four guardian kings (typical of any Dzong in Bhutan) of the cardinal directions. Each king is denoted by a particular colour. They are Vaishravana (North), painted in yellow; Virudhaka (South), denoted by blue, Dhritarashtra (East), coated in white and Virupaksha (West), red in colour. The steps that lead to the interior of the Dzong is flanked by the images of Drukpa Kunley, also known as the divine madman and the patron saint of Bhutan, Thang tong Gyalpo, known as the Iron Chair Maker who was a Buddhist master who built many iron bridges in Bhutan, and Togden Pajo, a Buddhist master who founded the Phajoding Monastery, close to Thimphu.

There is an assembly hall within the Dzong that houses a colossal statue of Sakyamuni Buddha, the thrones of the present king, the past king and Je Khenpo, the Abbot of Bhutan. The ceiling is adorned with a painted Mandala. One must note that it is the traditional inclination of the Bhutanese people that is so well reflected by patterns that have decorated the Dzongs of Bhutan. A visit to Tashichho Dzong in Bhutan will evoke a traditional ambience that makes this imposing structure nothing short of a living museum.

In the north-eastern part of the Dzong, there is a traditional cantilever bridge. Roofed cantilever bridges are common around Dzongs in Bhutan and they exude the historical and architectural heritage of Bhutan. In 1962, the Dzong underwent massive renovations upon the instructions of the then King, Jigme Dorji Wangchuk. A five year plan was made for renovations. Using traditional methods to renovate the structure, not a single nail has been used in the entire structure. Once, a venue for the National Assembly, today the Dzong houses the Secretariat, the throne room and offices pertaining to home affairs and finance along with the office of the King of Bhutan.