The Bhutanese Phallus: The Divine Madman and his Legacy 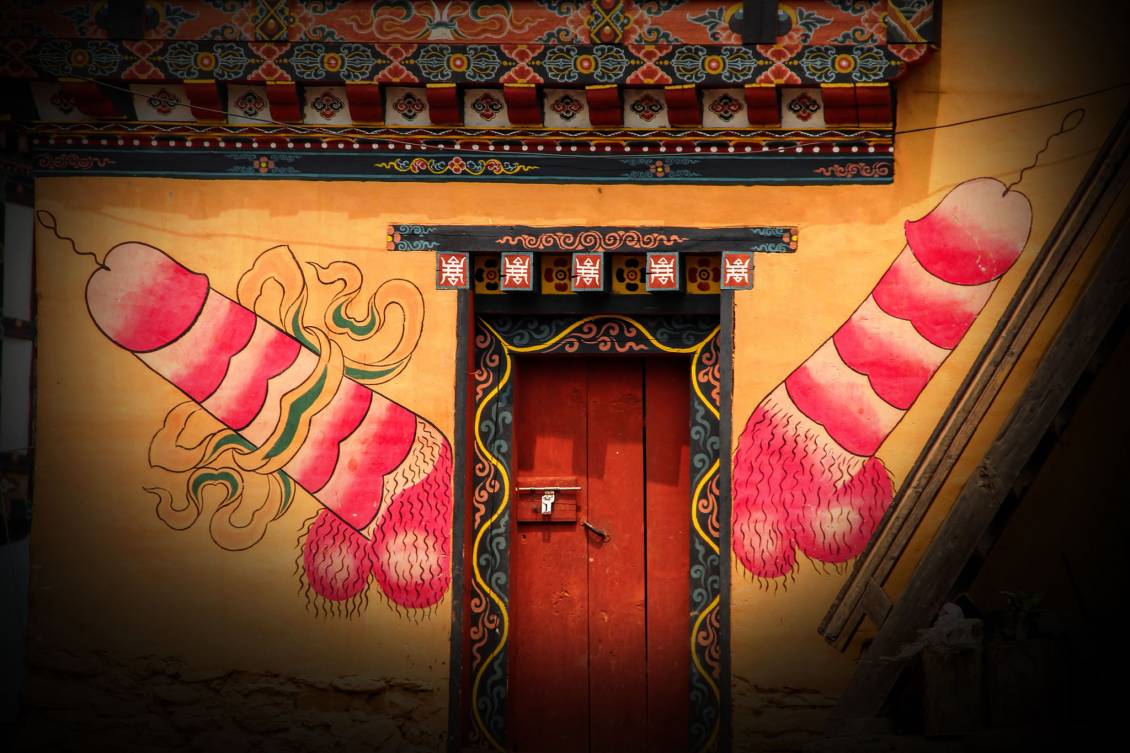 “I take refuge in the virile young tiger’s Thunderbolt,
rising proudly, indifferent to death;
I take refuge in the maiden’s Lotus, filling her with
rolling bliss waves, releasing her from shame and inhibition.”
~Lama Drukpa Kunley (The Divine Madman)~

Bhutan is spiritual perfection. It’s a country which has amalgamated Buddhist teachings with nature, traditions and legend to create an identity unlike any other. This weave of principles may look fascinating and exotic to the world but for Bhutan, it only holds a simple truth-a path to happiness. A way that must be preserved. And when the western world steps in, they are instantly captivated while other times they are completely bewildered, by its simplicity and complications. Sometimes both. It is a country whose philosophies are as large as its structures. Ornate but guileless. Its symbols are sublime, its ideas grand. Its icons are mystifying. So when Bhutan first opened its door to tourists, perhaps the most perplexing symbol of worship must have been the phalluses painted on house facades or those upon rooftops pointed in the cardinal directions. Very few sights in the world are as stunning as these. Though the worship of the phallic form is not new among eastern cultures, the detailed paintings and elaborate colours to depict phalluses across walls of traditional houses is a perplexing, yet amazing sight to behold! 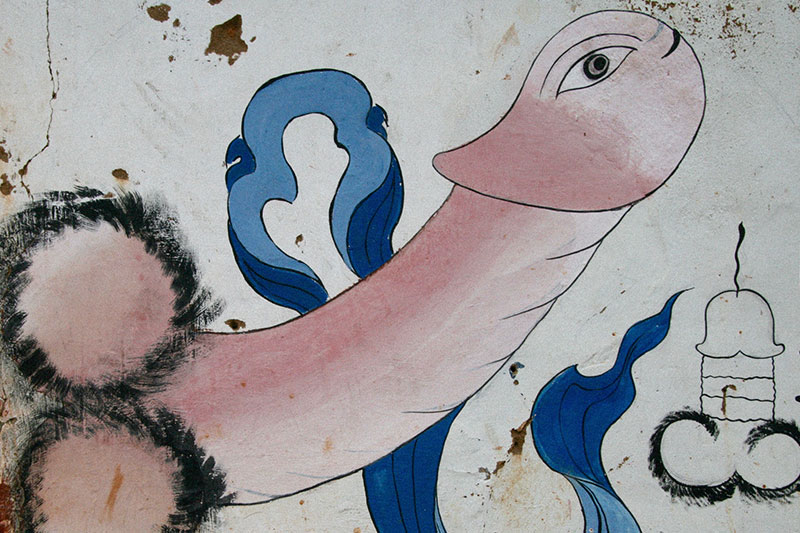 The Phalluses are associated with one Drukpa Kunley, also known as the Divine Madman, an eccentric 15th century monk who used unconventional ways to propagate his teachings.

Bhutan’s obsessive fascination with phallic drawings and idols is etched deeply into the country’s religious history and spiritual ideology. The Phalluses are associated with one Drukpa Kunley, also known as the Divine Madman, an eccentric 15th century monk who used unconventional ways to propagate his teachings. He used mockery, and outrageously crass and lewd methods to elucidate Buddhist teachings to the common people. Some of his most contemptible acts include urinating on sacred Buddhist paintings, stripping down naked or using coarse language in his sermons in the form of metaphors and allusions. But the biggest of them all, is when he would offer sacred scarves by placing them upon his penis and holding it against a monk to expose shams and hypocrisy. He fornicated with women regularly and drank wine which is in contradiction to what a monk is supposed to represent.

In Bhutan, there are phalluses painted on house walls, especially at the entrance, and phallic idols are placed on house rooftops pointing to the four cardinal directions. While placing the phalluses in the house, the monks who perform the sanctification ceremony go around the house in a procession playing their musical instruments, while the lady of the house follows them carrying a wicker basket containing five wooden phallic symbols on her back. The monks continue their prayer as the basket is pulled up with a rope to the roof. The ones on the rooftop are meant to protect the family, bring affluence, wealth, health, peace and wisdom. The fifth will be kept inside the house on the main altar. This is to bring good fortune, a sign that fertility will prevail and that the house will be filled with abundance. Although many associate Drukpa Kunley with the Phalluses of Bhutan but that is actually not entirely true. Granted, it exhibits the philosophy of the Lama Drukpa Kunley, the Divine Madman as can be witnessed at Chimi Lhakhang near Punakha but there have also been phallic symbols across other areas in Bhutan and Tibet. But only at Chimi Lhakhang, does one really feel a strong presence of these symbols. It is said that Drukpa Kunley always carried a wood and ivory version which is still in possession of the main Buddhist monk at this fertility temple. 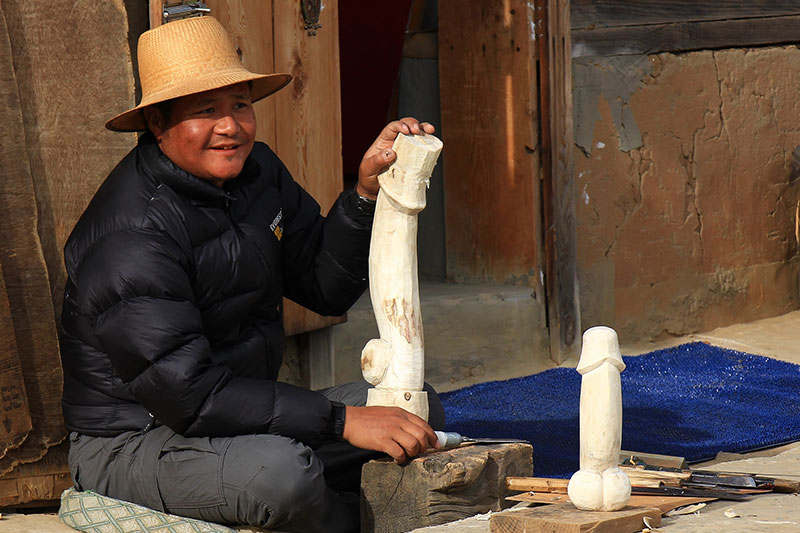 Chime Lhakhang, which is appealingly situated at the southern entrance of Punakha valley contains many phallic objects made out of stone, bamboo and ivory attributed to the Divine Madman

Arriving around Chimi Lhakhang feels like landing in the middle of an outlandish setting. There are phalluses everywhere, on the walls, rooftops and even in the form of memorabilia that you can buy on the streets! The famous fertility temple of Chimi Lhakhang must be on the visit list of every traveler who visits Bhutan. The temple stands atop a levelled hillock near Sopsokha village in Punakha. You roll into the village, some 20 minutes away from Punakha, along roads that run past meticulously tended paddy fields and mustard farms. Chimi Lhakhang was built by Ngawang Chogyal in the 14th century but more than its founder, the temple is known for Drukpa Kunley, the divine madman, who added a stupa and a meditation hall to the structure. Apparently, Drukpa Kunley was unconventional and quirky with an outrageous personal demeanour. He would fornicate, drink wine and would expose fake monks and scholars by flashing out his penis to ridicule them. Legend has it that Drukpa Kunley came to Punakha with the purpose of driving away an evil spirit from Dochula. He also created a ‘Flaming Thunderbolt of Wisdom’ and struck down that evil spirit that was in the form of a dog.

The structure of Chimi Lhakhang is an unadulterated example of Bhutanese medieval architecture. This is all thanks to the careful preservation by the locals and the government – where stylishly designed golden roof are complimented with white walls which are adorned with gold medallions that radiate beautifully amidst the green surroundings. This has certainly seemed to encourage the extremely ornate designs on the window frames and the door which lends the temple a rich, vibrant aura. There are prayer wheels on all sides of the structure. The inner sanctum has the idol of Saint Padmasambhava and also the statue of the Divine Madman himself. At Chime Lhakhang, which is appealingly situated at the southern entrance of Punakha valley contains many phallic objects made out of stone, bamboo and ivory attributed to the Divine Madman himself as well as miniature replica of his bow and arrow. These have historically always been used to bless childless women, and couples sometimes spend the night at the temple. Expecting mothers seek protection for the child that she is bearing, or for the well-being of their already born children too. 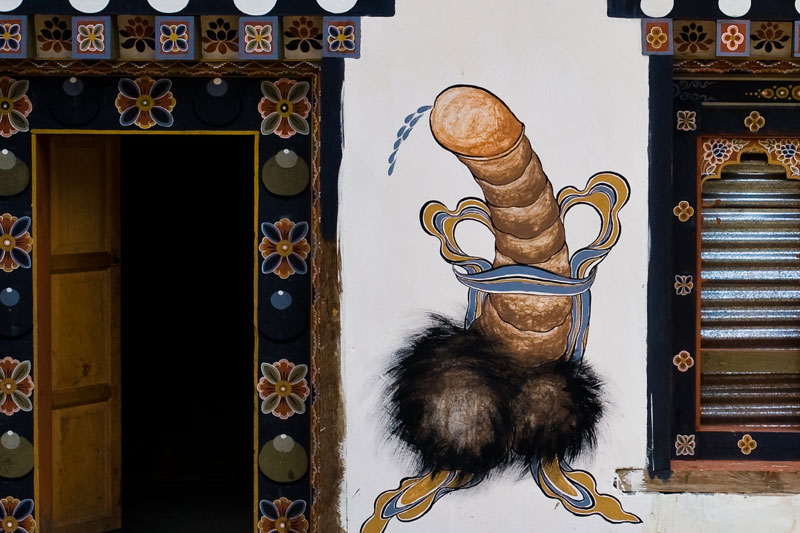 Drukpa Kunley once coaxed his own mother to sleep with him, the act of grave incest, and when she finally yielded, he got up and left.

But does the Phallus itself pertain to enlightenment and fertility and why must it become the symbol of the Divine Madman when he also propagated a variety of teachings related to the spiritual aspect of Buddhism? Contemporary Bhutanese people associate the phallus with its protective role too—its ability to ward off evil spirits or obstacles. It was Drukpa Kunley who subdued an ogress with his ‘flaming thunderbolt’, a metaphor for his male organ. This is the reason why tiny phalluses are carved from special trees for the protection of children. As amulets these are also hung around the necks of children or animals, and kept inside houses, shops or cars. It is also believed that Drukpa Kunley once coaxed his own mother to sleep with him, the act of grave incest, and when she finally yielded, he got up and left. The very next day he went to the market and told everybody about this incident bringing great shame upon her. His method was to uncover the hidden weaknesses of his mother but by exposing them, her flaws and faults were eliminated, her sins recompensed and her afflictions were removed.

This very idea of letting go of shame and guilt to purge people off their sins and to make them really free must have been the idea and method of Drukpa Kunley. The penis idols, paintings and amulets that make modern civilizations cringe and laugh are all notions of shame that bind us to a particular set of ideals. Only by letting it go does one become free in the truest sense. This freedom allows you to observe, accept, and release this guilt, and helps you focus to create possibilities, positive beliefs and thoughts. Over time, this freedom can help us learn to identify the beliefs and thoughts that lead to guilt so that we can let them go to feel lighter and be less attached to ideals set out by societies and modern sensibilities. Drukpa Kunley’s philosophy was the attainment of freedom from attachments, not just familial or worldly but also freedom within, from our prejudiced ideas and beliefs. The phallic symbols not only signify that liberty but they also denote symbolic fertility, the birth of the new person, unrestricted by attachment, shame, guilt and remorse. 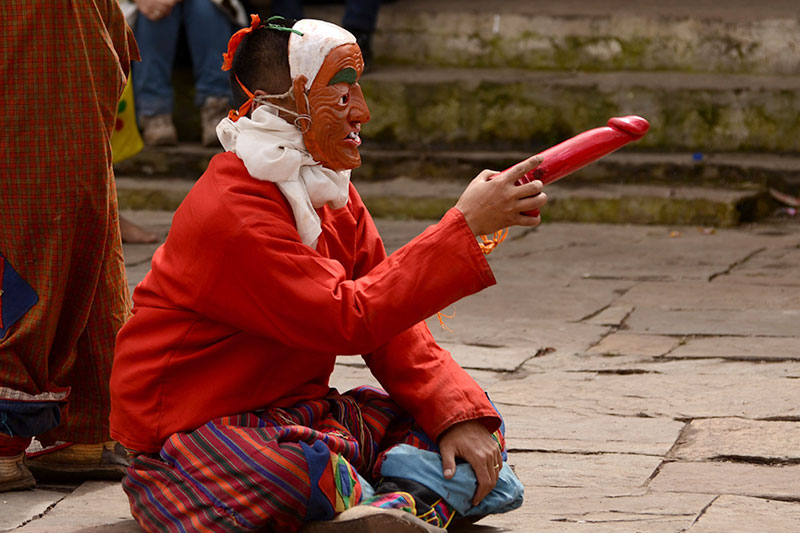 Here in Bhutan’s beautiful green expanse of jungles and meadows broken only by the twisting lines of rivers and a high range of hills, there is no sign of modern ideals that bind us to things. Instead, there’s freedom, resounding over the ages, ideals that shine like a splendid emerald of truth. Bhutan possesses a unique cultural heritage, revealed through its stunning Dzongs (fortresses), monasteries, its nomadic tribes that coexist with traditional spiritual practices and its unique religious symbols. This is a part of legend, lore and religious principles that you can learn about and enjoy as you pass through the stunning and sparsely populated regions of Bhutan. And then there are those phallic symbols and idols on poles, rooftops, and even in temples, reminding us that we must let go of all that we know and feel, to truly explore our own understanding and question our set of beliefs. 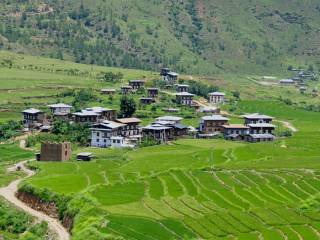 Magical Bhutan Through The Lens

Bhutan is perhaps one of the most photogenic places in the world. The landscape, nature, culture, architecture and the people…
View Details 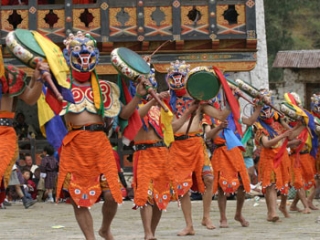 From the breathtaking views of Mt. Everest as you fly to Bhutan, to the stunning sights of the Dochula Pass,…
View Details 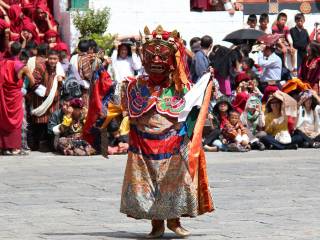 We have crafted a trip that weaves together visits to this compelling cultural event. This journey will let you discover…
View Details