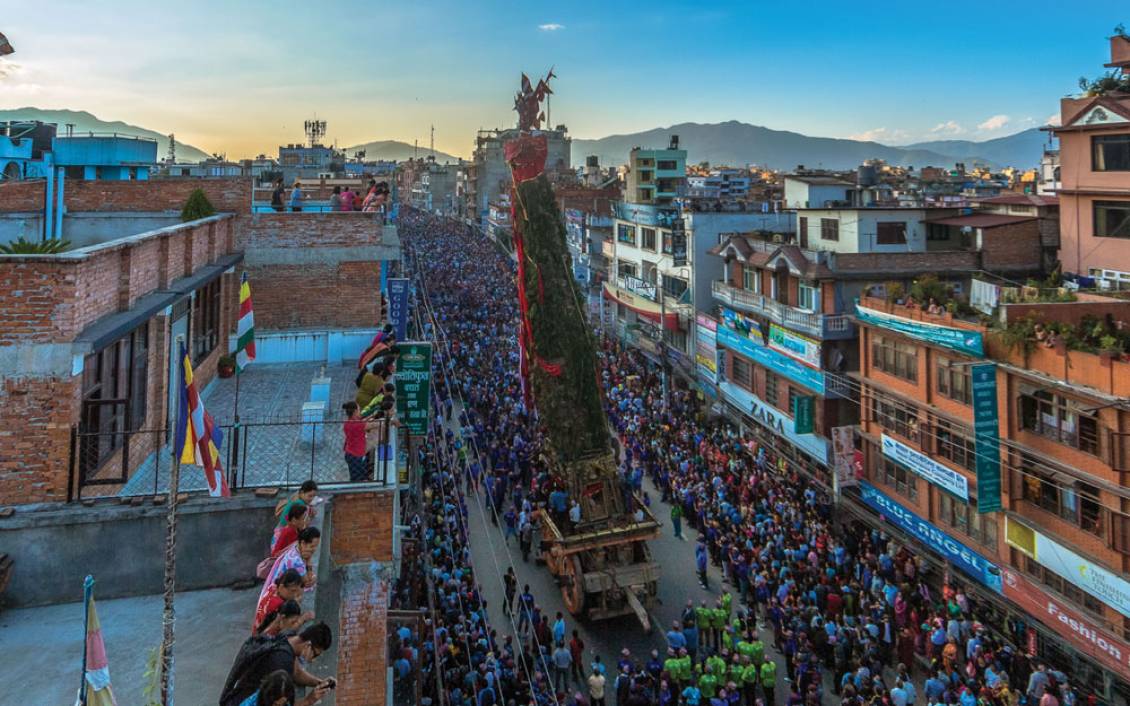 There are numerous reasons to fall in love with Nepal, an otherworldly nation of rituals, customs and incredible spiritual awakening. Its customs are magnificently ancient, it’s beautiful shrines dotted with ornate grandeur, thousands in attendance, and extravagant ceremonies that mark the way across this mesmerizing world of ritualistic expressions. The Rato Machhendranath Jatra explores one of them, delving into one of the country’s most spectacular and coveted religious proceedings. Beginning at South Patan, Rato Machhendranath Jatra is a Chariot procession ceremony of a deity, along city roads and alleys, across a sea of devotees and observers, where the ceremony is both inward and outward, a reserved experience and also a public spectacle.

Rato Machhendranath literally means the “Red Fish Deity”. Machhendranath is considered to be the God of rain and abundance. Some believe that he is “Karunamaya”, the God of compassion while others consider him to be the patron saint of the Kathmandu valley. The Buddhists identify him as Padma Pani, the fourth Buddha, who represents the elements. Red is mentioned because of the colour smeared or painted upon the idol of the deity. The idol is painted every year, after erasing the artwork of the previous year. Using Gokul Dhoop which is a kind of incense, the paint in removed. Mud, which is brought specially from Mhepi, is then smeared on the idol, thereby giving it proper form. Then the idol is painted using red paint called Simrik. The eyes are painted using burnt cotton wicks. Each portion of the preparation of the idol and the chariot are performed by representatives of particular communities of the Newari people. 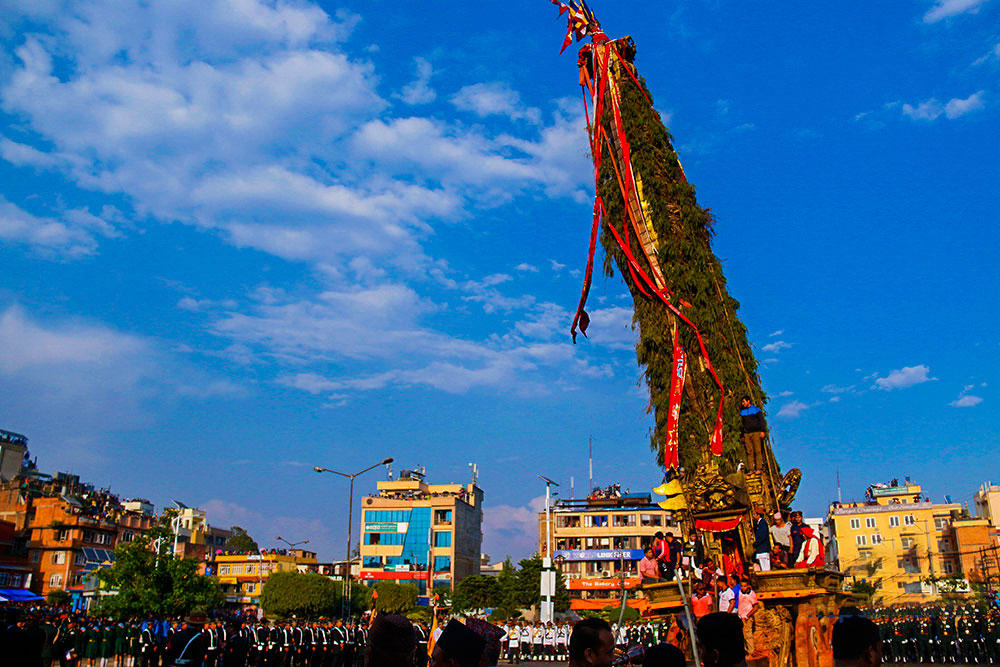 The chariot of Machhendranath is constructed with wooden frames and without the use of nails. A team of 12 people from the Yanwal community are tasked with tying them together with canes.

Worship might mean revering a deity at a temple individually or even immersing yourself in a congregation, so that you share a connection with others. Some experiences just have a way of soaking into your being; of making you reflect on yourself, about others, or the human existence as a whole. Machhendranath Jatra is about all of that. The chariot of Machhendranath is constructed with wooden frames and without the use of nails. A team of 12 people from the Yanwal community are tasked with tying them together with canes. This is done with amazing precision and without any safety harnesses, and by dangling at a dangerous height, logs are tied together and the tower is wrapped with pine and bamboo. They tie the cane pieces with one another and make hooks and knots in each frame. This continues up to the pinnacle of the chariot. A total of seven frames are used to construct the chariots. Eight main pillars, which the Newars call “Gathamwas” are used to build the tower. Each of these pillars represents eight different mountain peaks. These peaks are believed to have helped usher God Machhendranath into Nepal. The frames are roomy at the bottom of the chariot. As the chariot is made in a pyramidal shape, the size decreases with height and ends in a spire. The people of the Barahi community are responsible for repairing the colossal wheels, carving the base and erecting the tower of logs for the chariot. 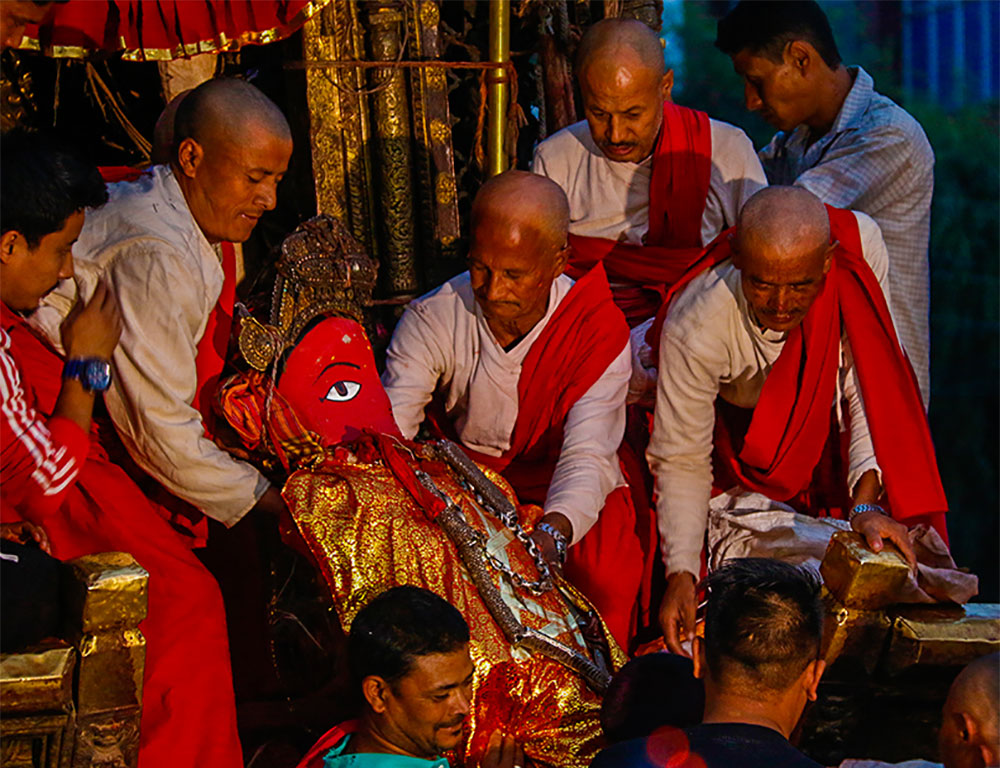 Legend has it that during the reign of King Narendra Dev, a 12 year drought in the valley caused all water sources to dry up. This brought about famine and pestilence. After a long meditation, the kind’s spiritual guide told him that it was Saint Gorakhnath who had caused this drought by imprisoning all nine of the valley’s rain giving snakes. It fell upon the King to summon the Guru of Gorakhnath, Lord Machhendranath himself to Kathmandu valley to help appease the Saint. The King, along with a man from Kathmandu and a farmer from Patan travelled to Kamakhya in Assam, India and brought along the idol of Machhendranath along with them. Learning that his teacher was in Patan, Gorakhnath went to see him freeing the rain showering serpents from below his seat, showering rain upon the valley. 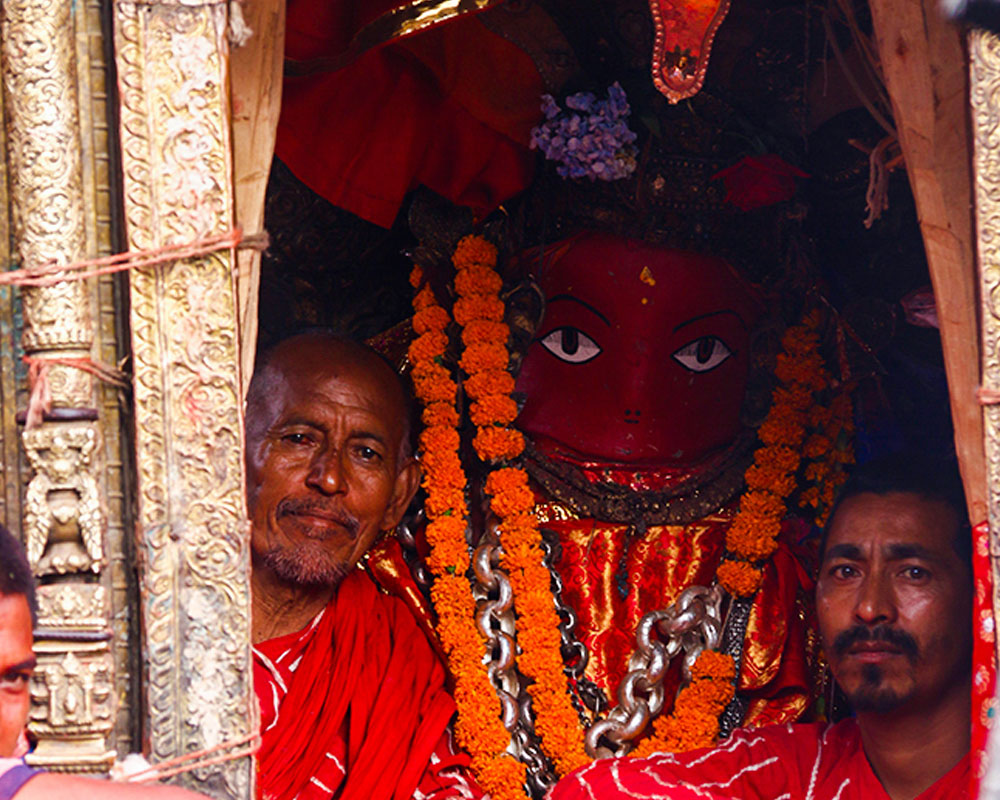 Initial ceremony begins two weeks before the actual chariot procession, on the first day of the dark fortnight in April, when Machhendranath’s idol, is carried from his temple in Bunga village, in a small palanquin to an open pasture in Lagankhel in Patan, where the King and his men are said to have rested when bringing him into the valley. Here, the idol is bathed in holy water while the King’s legendary sword accompanies the idol. A ten day ceremony follows this ritual during which the idol is repainted and is taken to Pulchowk where the Chariot awaits the God. Upon the chariot is a temple like throne room which is the seat of the idol. This rises to a fifty foot steeple of wooden log pieces lavishly adorned with green branches, flowers and colourful festoons. The enormous vehicle moves on incredible primitive wooden wheels in which dwells the spirit of the four Bhairav deities who frightened off the demons from Assam. Before this ornate chariot, protrudes an upward curving horizontal beam of considerable length, ornately carved with a serpent head of the Snake God. 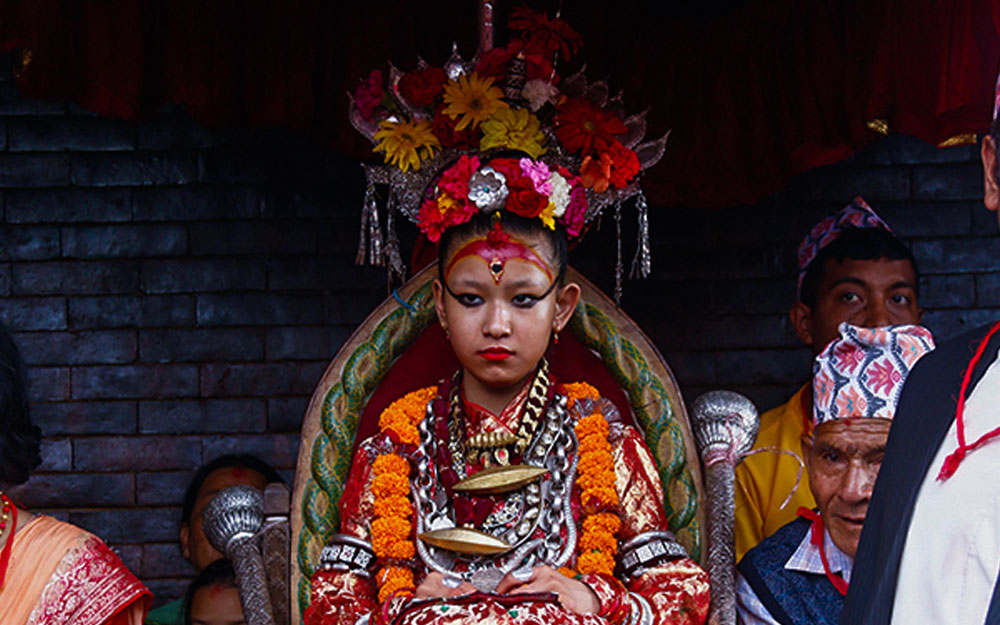 Rato Machhendranath Jatra is an incredible ceremony, where thousands of people gather in devotion to a towering pinnacle moving across the masses, like mountains rising from the sea

During this month long procession, the fifty feet tall chariot of Rato Machhendranath along with a smaller thirty feet chariot are paraded along the streets of Patan for several weeks. The procession starts at Pulchowk and moves to Gabahal, Hakha, Sundhara, Lagankhel, where it rests for more than four days and finally reaching Jawalakhel. The chariot rests in Jawalakhel for four days and the procession ends there with the public exhibit of a Bhoto, a jewelled vest. The procession takes place every year in the month of Baisakh (April/ May). The procession is accompanied by traditional musical instruments Dhime (drums) and Bhushya (brass cymbals) and numerous men playing flutes.

Rato Machhendranath Jatra is an incredible ceremony, where thousands of people gather in devotion to a towering pinnacle moving across the masses, like mountains rising from the sea - a spectacular pageant of shapes commemorated to the Gods. Like many religious ceremonies this one is also about spiritual transformations but not in prayer filled temples but through the incredible amalgamation of participation and tradition that signifies the very essence of Nepal’s Hindu and Buddhist devotion.