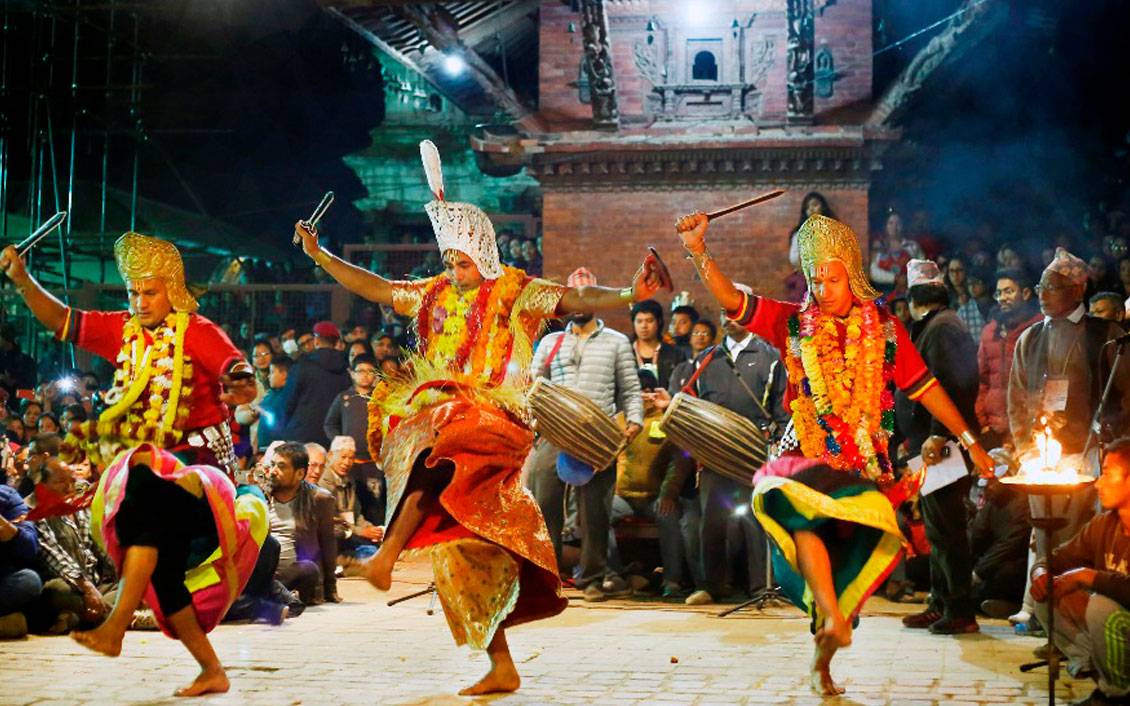 The valley is a land of mystique, myths and home to millions of deities. Here, festivals are a unique way to adore gods and divinities.

Kathmandu valley possesses a wondrous assortment of alluring festivals that are still largely unknown to the outside world. The valley is a land of mystique, myths and home to millions of deities. Here, festivals are a unique way to adore gods and divinities. This is a place where Buddhist & Hindu gods and goddesses mingle with mortals around the most magnificent temples, monasteries and palaces. The people celebrate their own lives with feasts and music to achieve spiritual growth. These are the unique festivals in Kathmandu that have been passed down through centuries to show true devotion. They are performed not only for entertainment but to help connect people from their mundane world to a truly spiritual realm. They are vivid, brilliant and lively celebrations which bring an intimate view of the history and fabric of the Nepali culture. Here are some of the most unique and colorful festivals of the valley. 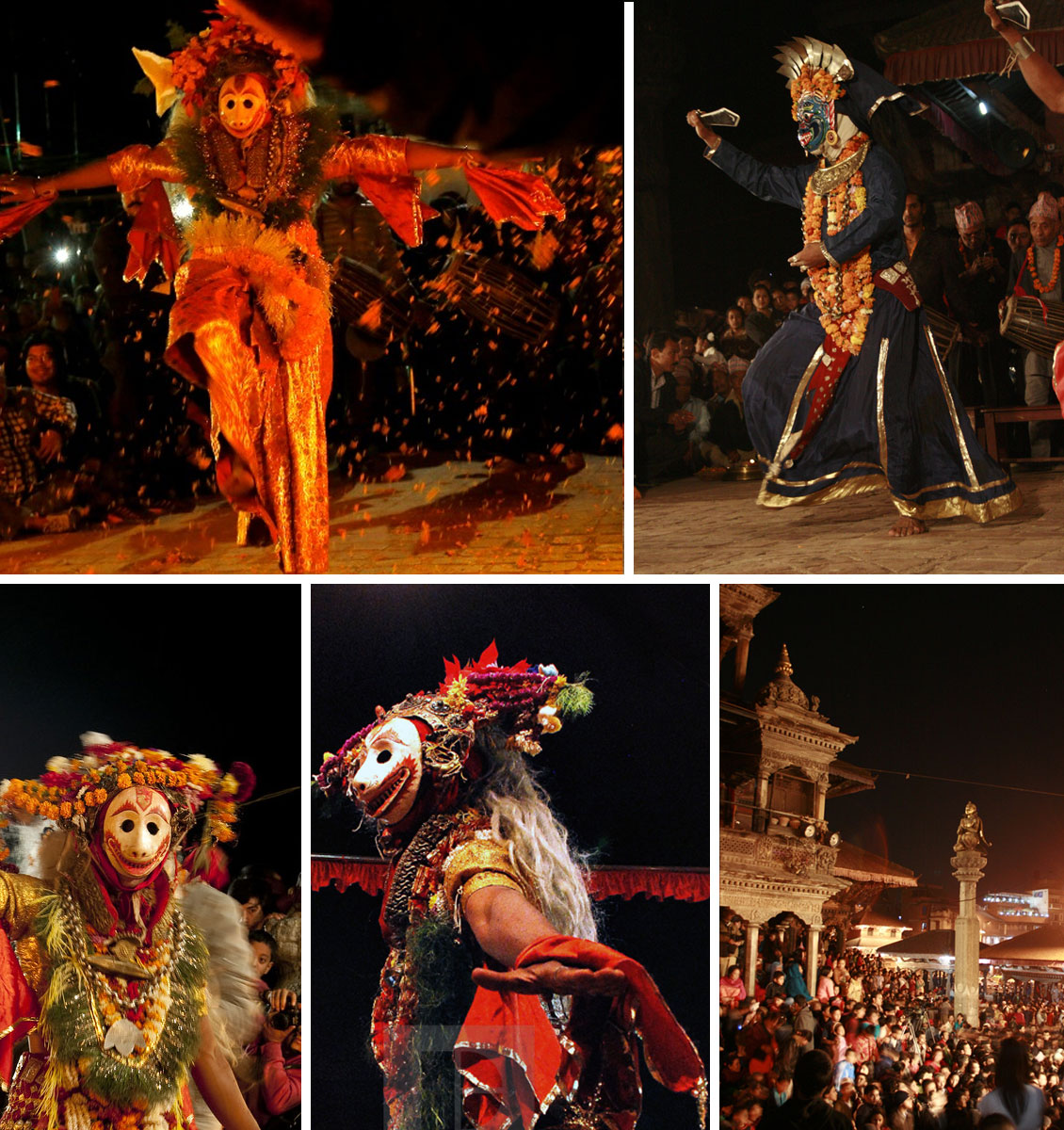 Not less than 100 tantric masked dancers take you back to the 17th century. These masked dancers who wear traditional costumes with ornaments resembling gods are believed to be blessed by divine powers. This traditional dance recital happens in the ancient royal courtyards of Patan, exactly the same way it was performed during the reign of one of the Nepali malla kings Siddhi Narshingh Malla. The golden window of the palace high above is open only on these nights, to honor the devout king who initiated the drama. The traditional music, cheering sounds of people and thunderous applause continue until midnight.

Groups of Nepali, young and old, gather in the Patan Durbar Square to watch the open-air demonstration of this historical dance-drama. The theme is based on the sections of principle in the Hindu texts, The Mahabharata and The Puranas. Amid the throbbing music and excited crowd, Narasimha an incarnation of Vishnu, the supreme Hindu god, takes refuge on the center stage. Wearing a ferocious mask, he holds one hand towards the ground and another pointing up in the air. He moves with the blaring beat of the music leading to the execution of the Hiranyakashyapu, a powerful demon king. Each segment of the dance portrays unique stories of the various Hindu deities. This legendary classical drama performance is an art form for educating people on their civic duties and how good triumphs over evil. It is one of the finest, most vibrant, ancient, artistically sophisticated dance recitals of the valley. 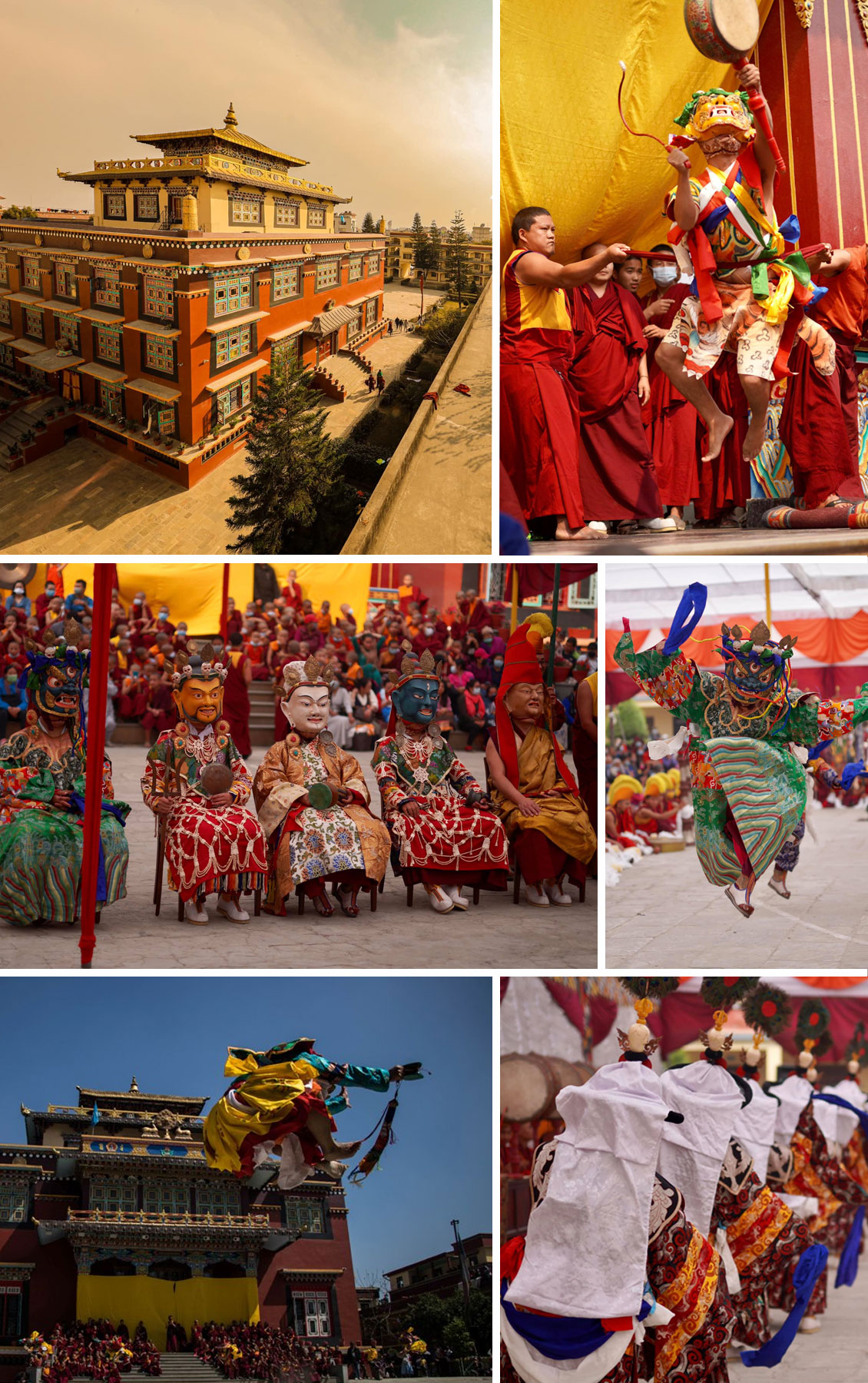 A group of trained monks wearing colorful brocade costumes with various bone ornaments and heavy wrathful masks parade into an open stage. They dance slowly and deliberately in measured synchronized steps, while large drums and cymbals beat out a slow, continuous rhythm. Background chanting fills the environment. The vibrating energy created by the sound of the giant gong makes it a profoundly moving experience for the audience. This dancing teaches you about the deeply rooted Tibetan Buddhist culture, history, and spiritual practices. These dances display some of the very secret practices performed by experienced Buddhist lamas in ancient times as part their part of training. The dancers try to visualize themselves like the deities of the mandala during their performance. It is a vigorous meditative exercise requiring a lot of energy and concentration. This legendary historical tale is performed each year on the 10th day of the second month at the monastic courtyard of Schechen Monastery, marking the birthday of Padmasambhava, Guru Rinpoche.
This Festival of the Tenth Day is an honorary presentation of the eight manifestations of Padmasambhava (Guru Rinpoche). During this enchanting ceremony different dances are intricately performed such as the Black Hat, Red Mask, Ging, Clowns, and Dorlo Drolo. Additionally, other cham festivals are celebrated all over the Himalayan region of Nepal, Tibet, Bhutan and India. It is believed that spiritual merit can be achieved by the sight of these intriguing dances. It is an annual sacred event and an offering to the public to liberate them from negative thoughts which grow from ignorance, hatred, jealousy, pride etc. These performances help to purify the body, speech and mind from evil forces and obstacles.

Bisket Jatra – The chariots of the gods in Bhaktapur 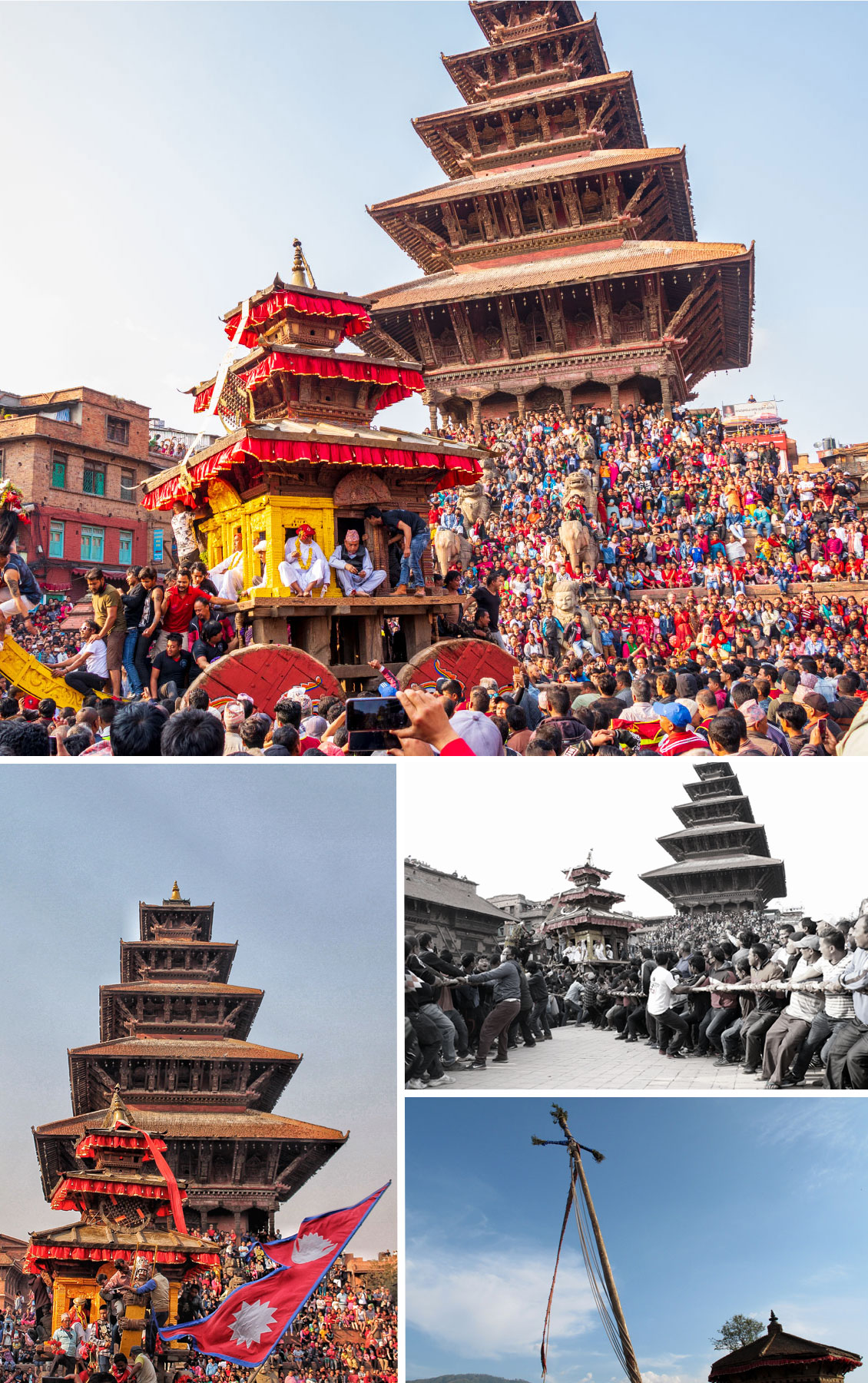 Sturdy chariots of wood are made during the month of April in Bhaktapur. The most wrathful deities of Hindus, God Bhairav and his consort Goddess Bhadrakali are taken out of the temple and put on procession. They are put in lumbering chariots of pagoda temples and hauled through the streets of the ancient town by groups of men tugging on long ropes. This festival is based on many stories, folklore, myths and traditional beliefs.

Bisket Jatra is celebrated for nine days with a lot of feasts, music and street partying. Along with the parade of pagodas, a huge 70ft. wooden pole, a lingam, is erected. The authentic Newari culture comes into full bloom during this boisterous festival. An additional feature of the festival includes offerings of five delicacies of rice wine, meat, fish, boiled egg, and lentil cakes to the deities. They represent the five tantric elements. Additionally, a devotee performs a tongue-piercing ritual while other participants spread red vermillion powder on one another and into the crowd to welcome the spring and our unique Nepali New year. Happiness and a spiritual aura fill the environment of the valley. 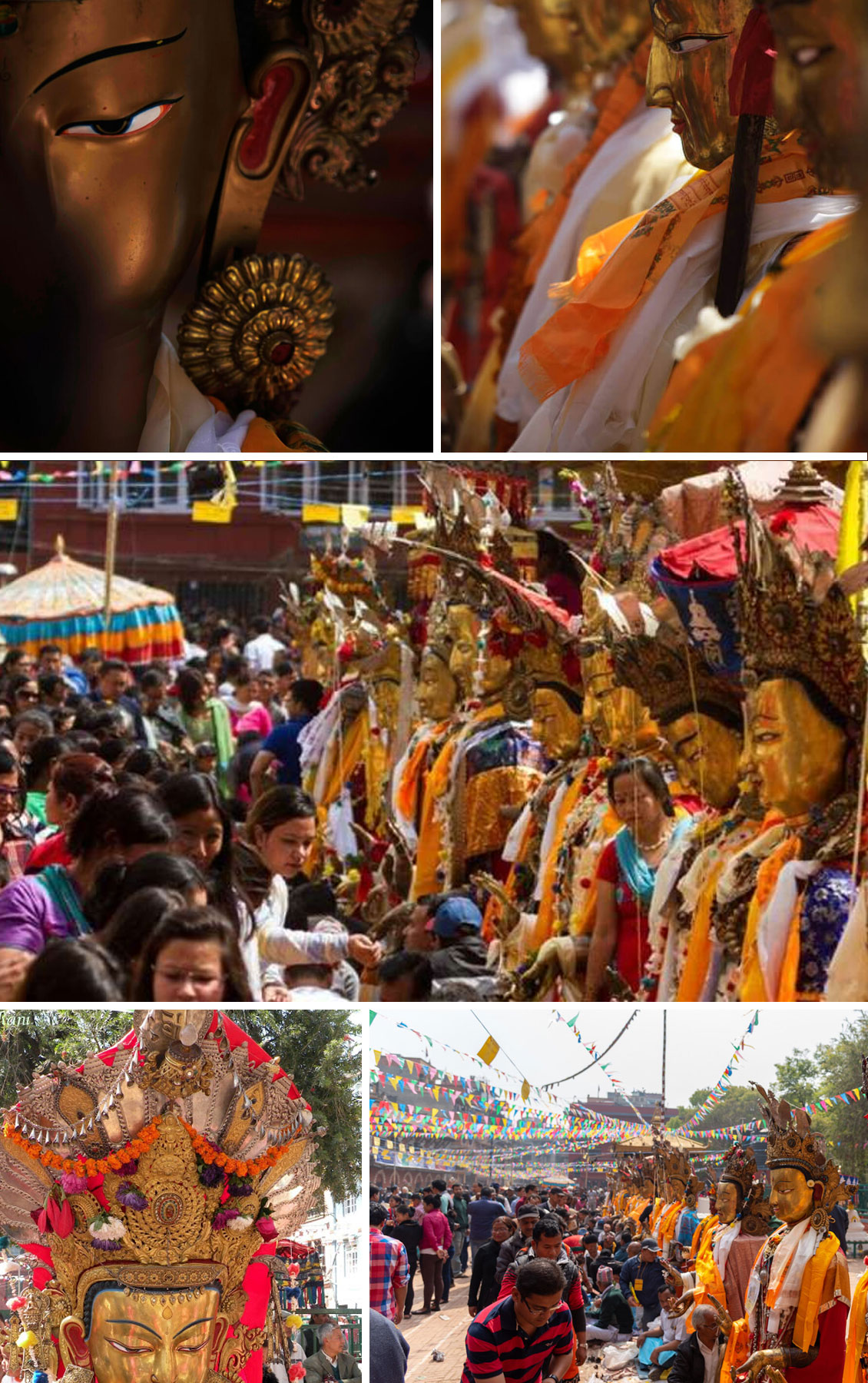 Over 145 Buddhist deities including Dipankara Buddha, Basundhara, Arya Tara, Awalokiteshwar and other Buddhas and Bodhisattvas are taken out of their temples around Patan and paraded through the city allowing devotees to venerate them. This ceremony brings together a wide cross-section of the Newari community from all walks of life. The city reverberates with the chants from this religious performance.

The main Ilan Samyak is a two-day almsgiving Newari Buddhist festival held only once every five years in Patan. Two other cities of the valley hold this festival at different intervals, a smaller annual festival in Bhaktapur and one every twelve years in Kathmandu. The festival traces its root to the 10th century and has always been held on a large open area. Buddhist deities are assembled for worship and then ritual processions which lead back to their temples. It is a most spectacular Newari Buddhist celebration.

Read more:
10 Places of Interest in Nepal
5 Uncommon Treks in Nepal
5 Trips to add while you are in Kathmandu
5 Spiritually Powerful Places in Kathmandu - A must Visit.
6 Mountain Peaks in Nepal that you can conquer easily
5 Beautiful Lakes of Nepal
5 Books About Nepal You That You Must Read
5 Short Treks in Nepal
Into Thin Air - Pathway to Heaven